Long overdue: the story of our summer trip to Greece (2016)!

When Alex found a conference to attend in her field in Athens, we decided to incorporate this into our family vacation and head to Greece with the kids.

Alex went into trip planning mode (she is an excellent trip planner) and we decided to spend 4 days in Athens followed by 17 days on the island of Crete. Instead of island-hopping, we figured there would be enough to do and see on the huge island of Crete. Alex used AirBNB and HomeAway to find us an apartment in Athens, and three in Crete. We booked a direct flight from Montreal to Athens, and it essentially had us arriving in the city in the early morning. The 9-hour flight was uneventful and we had brought plenty of entertainment for the boys on two separate tablets. Oscar being under 2 years old did not have his own seat, so I tried to keep him in the Baby Bjorn carrier as much as possible. This worked pretty well. We arrived at the Athens airport and negotiated a VIP taxi (the only kind large enough to hold all our luggage and our double stroller), a Mercedes van that had us seated facing each other in its comfortable seats.

We arrived at our apartment in Athens and met our host. The apartment was unbelievably well-located, literally across the street from the Temple of Olympian Zeus and within walking distance of almost all the attractions in central Athens. Alex was chairing a session at the conference on our first day, so I would be on my own for a few hours with the boys. I decided to walk the streets in central Athens, with the boys in the double stroller. We wandered through the flea market, ate some excellent pizza and ice cream, and met up with Alex so we could all relax back at our apartment.

The next day, we bought a pass that would allow us to visit the Acropolis, the Ancient agora, the Roman agora, Hadrian's library and Kerameikos. Over the next three days, we managed to visit all of these sites. We were basically outside most of each day until dinner time, occasionally eating in restaurants but mostly making our own lunches or dinners. We made a lot of Greek salads! The boys ate a lot of panini-pressed ham and cheese sandwiches.

My overall impression of Athens is that it is a great city with a lot going on. It is compact enough that we never used a bus, taxi or metro, as we could just walk everywhere. As it was summer, it was of course very hot, but we expected this and had an air-conditioned apartment. The people were friendly and I generally liked the vibe we were getting from the place. I would like to go back some day and see what it is like after dark, when the temperature is more bearable (something we could not really do with two pre-schoolers).

On July 1st, we woke before the crack of dawn to get a taxi to the airport and our short flight to Crete. When we arrived, we met with the representative of the car rental agency with which we had booked a car and I was handed the keys to a 2009 Ford Focus (according to my booking document, I was supposed to have a Nissan Almera, but was very happy to get a good-sized hatchback instead).

We drove to the first of three cities where we would be staying, Rethymno. Our apartment was very well situated, on a main street near the waterfront, less than 10 minutes on foot from the historic district and about 15 minutes to the local beach. We were also close to various sized supermarkets and pretty much any service one might need. We ended up walking to the local beach almost every morning, before it got too hot. We must have taken 10 different paths to get there through the Venetian quarter and we loved getting lost on our way there or home, usually while looking for some shade. We bought an inflatable tube for Jules and he loved floating around on the small waves washing ashore. Oscar didn’t love getting into the water, but was happy to play with sand toys at the water’s edge. While in Rethymno, we visited the large local fortress called Argiropouli, we drove to see the Arkadiou monastery, the Armeni Minoan cemetery and we took a drive through the mountains to visit the Amari valley and swim at Preveli beach. We sometimes ate at restaurants, but most often made some kind of meat at home in the frying pan with some tzatziki (surprisingly hard to find in the supermarket!) and Greek salad. It was warm and sunny every day we spent in Rethymno, but we were by now used to the heat and it was easier to deal with when within walking distance of a beach.

After a week in Rethymno, we moved to our next rental condo, in a small town called Kolymbari, which was a 15-minute drive from the town of Chania. This would be our base to explore the western end of the island. When we entered the condo, we were extremely impressed. It was a very recent construction, but, more importantly, it directly overlooked the Mediterranean. There was only a boardwalk between us and the water. There was a balcony that could be accessed from the living room or the master bedroom. As a bonus, there was a huge roof deck where we could hang out and even have dinner. The beach itself was not ideal for swimming because of the large pebbles covering it, but we were within driving distance of a multitude of other beaches. We visited the lovely port town of Chania on a couple of occasions. We drove to remote Elfanosi beach, one of the nicest places we have ever been. The roads through the mountains were twisty and narrow, but our Ford Focus was up to the task and fortunately, there were not that many other drivers. On one occasion, we stopped for lunch in one of the tiny towns near the coast and I had fish that had been caught that morning. Incredibly, the only other patrons of the restaurant were also from Quebec (Quebec City, in fact).

One of the great features of Kolymbari was its situation close to some mountains, which meant that at about 7:30 pm, the sun would set on the town. This allowed us to enjoy some long walks as a family in the residential part of the town. Some of the neighbourhood streets were too narrow for cars and must have been hundreds of years old. There was an Inka supermarket in our town, and we pretty much cooked all our own dinners, from souvlaki to burgers.

After a week in Kolymbari, we moved to another apartment near Heraklion. We had realized that the airport was too far from the Chania area to try to make it there for our 6:30 am flight to Athens, so we rented this third condo. It turned out to be just outside Heraklion, but on a country road. The large, modern apartment was built under a large house and had a beautiful view into a valley. There were several fruit trees on the premises (lemon, orange, lime and pomegranate) and an olive grove adjacent to the property. It was very peaceful. We visited the bustling touristic area of Heraklion on each of our two days in the area and ate what was probably our most “authentic” Cretan meal, a mixed menu of stewed local dishes. We also visited probably the biggest tourist attraction on Crete, the Palace of Knossos. The palace is remarkably well-preserved, but I was usually looking for some form of shade in the hot morning. Luckily, we arrived before most of the other tourists and never had to wait in line. On our last evening in Crete, we found a cute beach at Agia Pelagia, and lingered there a bit longer than usual, as we knew it was our last day on Crete and in Greece.

We managed to make it to the airport and drop off the car with no incident, and the boys behaved splendidly on the long flight home. We arrived in Montreal in the middle of a crazy little tropical-type storm and the pilot actually aborted the landing on the first pass due to strong winds. We landed for real 15 minutes later and were glad to be home.

It was a fantastic trip, organized almost entirely by Alex. As is always the case, the choices of rental apartments and itinerary were spot-on. I’m sure the boys had a great time and I know Alex and I did. I look forward to another trip to Greece at some time in the future, as I feel we only began to scratch the surface of what the country has to offer. 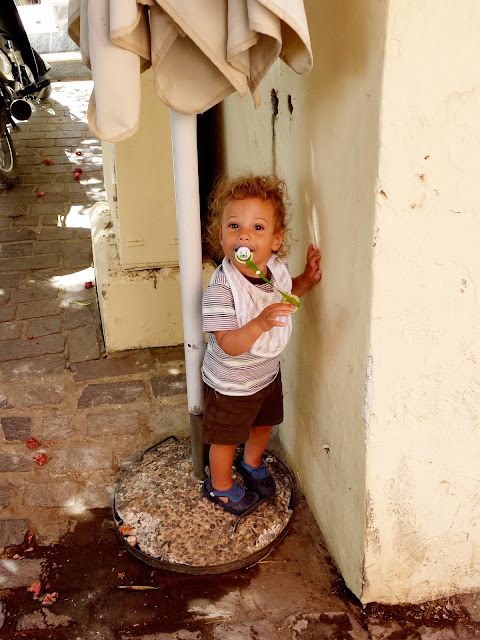 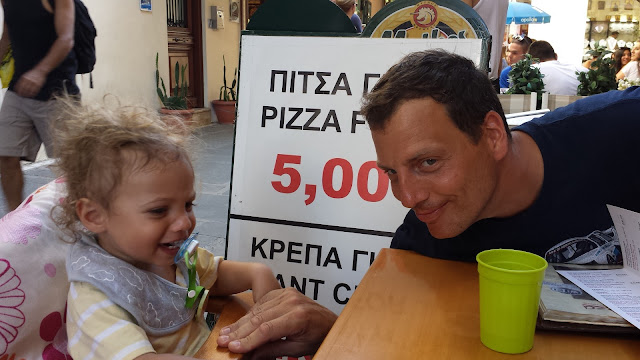 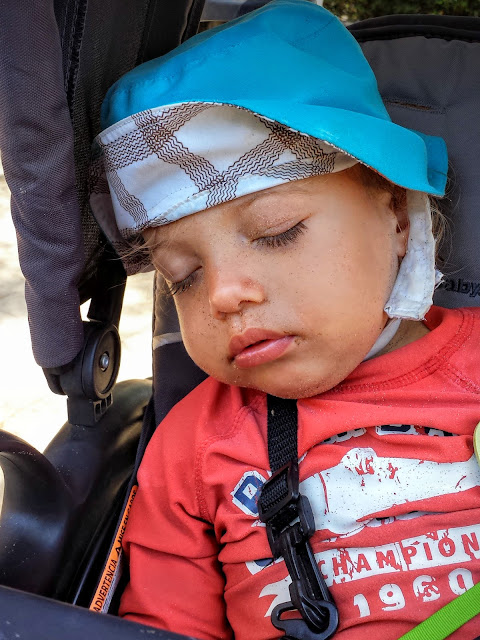 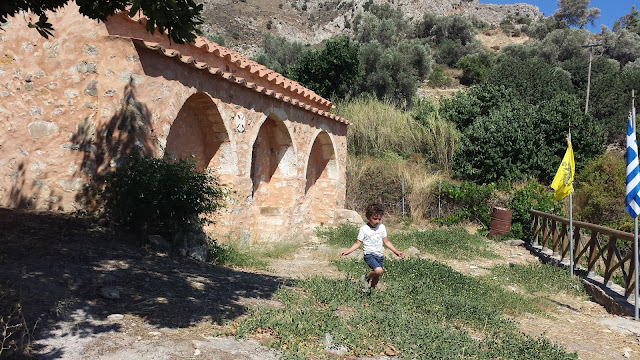 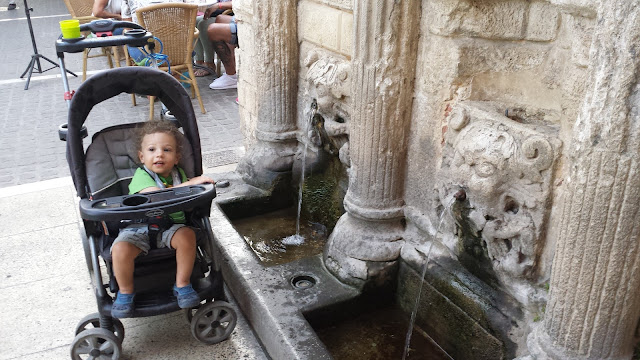 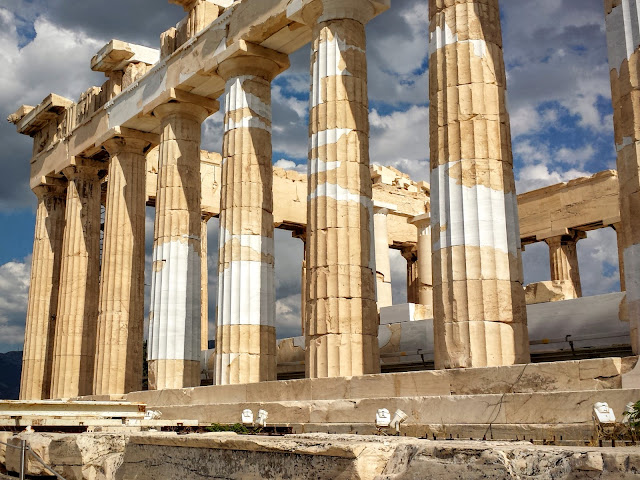 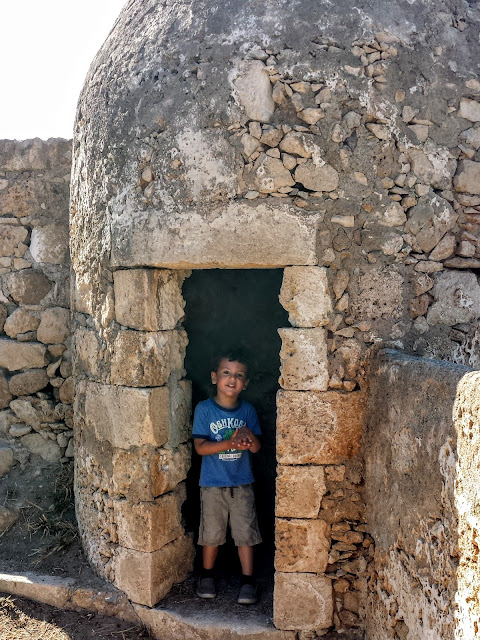 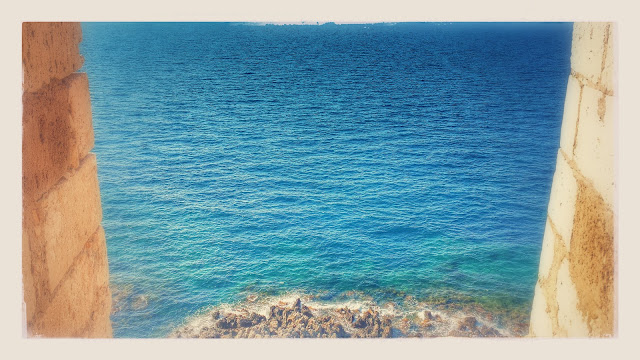 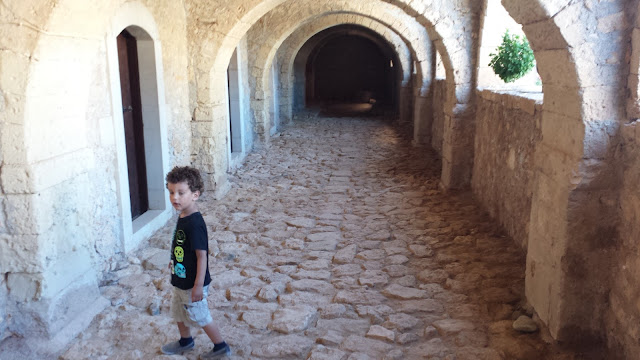 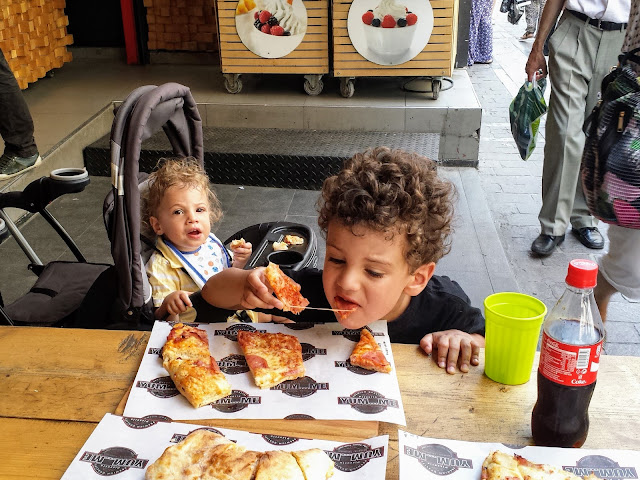 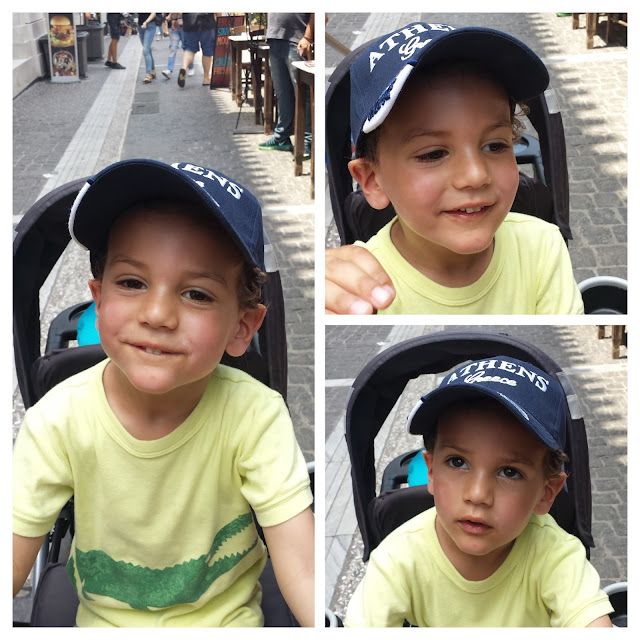 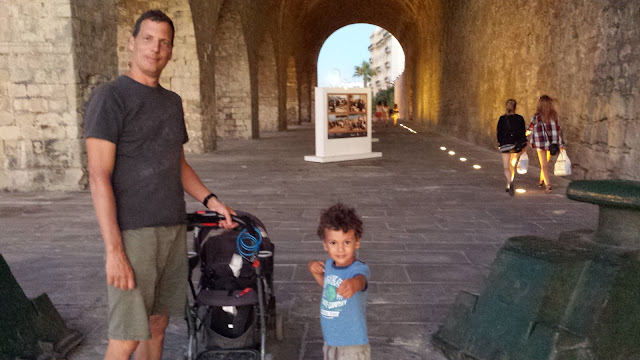 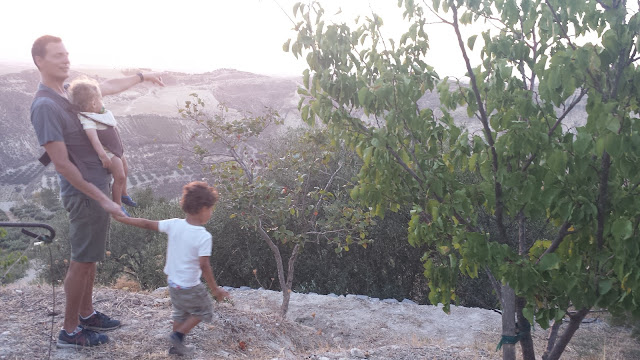 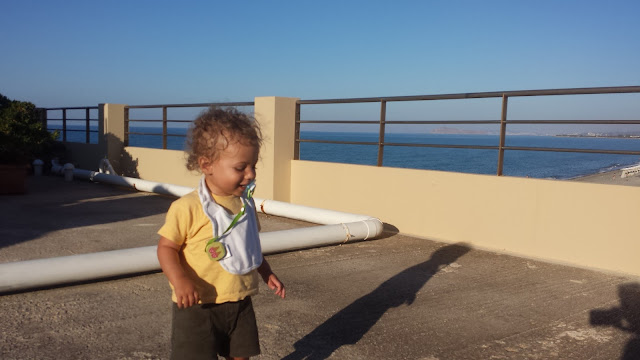 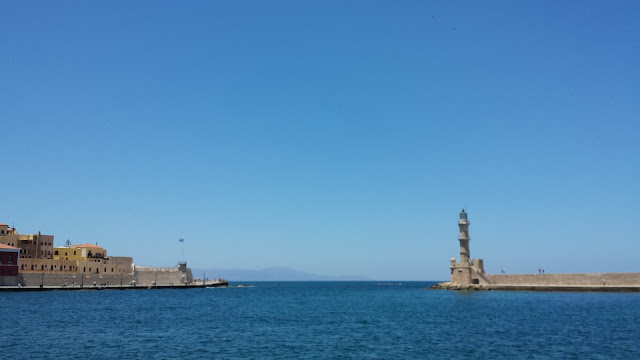 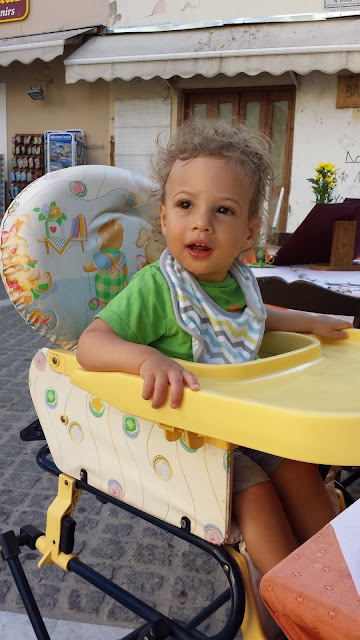 Posted by Vincent Basile at 12:42 PM No comments:

Winter... not that bad this year?

Winter really didn't seem that bad this year. Part of this is due to the fact that I no longer have any fear of winter driving conditions and getting the car stuck somewhere. Part of this is also due to the relatively mild weather we've been enjoying. The fact that I've been pretty busy with work has also made time fly and made winter feel shorter.

There is not much going on car-wise. We went to the car show in January, but it was extremely busy, as we went on the weekend. The Saabaru has been reliable and had a couple of decent workouts in the two TSD rallies I attended with Josée.

I haven't done a single think to the Civic to prepare it for the upcoming track driving season, but, aside from fitting new tires and swapping on a few parts I have in my basement, there shouldn't be much to do to it before the first racing school in April.

The BMW should be coming out of hibernation in the next few weeks and the Saabaru will go into storage. I think this is the first time we've ever owned 3 cars at once, all functioning... here is a photo montage. The cars really couldn't be more different from each other!

As has been the case in other years, there are still cool cars roaming the streets, even though it's winter.