I killed my Civic :(

I still can't really believe it, but, due to a driver error on my part, I destroyed my Civic by crashing into a Jersey barrier at the ICAR lapping night last Wednesday. I had just been passed by two BMW's and figured I could keep up with the second one through the high speed esses. I entered the left-hander a bit too fast and drifted a bit off the apex, which seemed like no big deal at the time. Just after I entered the steering input for the right hander, the rear of the car let go and I got back on the gas to catch it, but there was very little runoff area and I found myself headed straight for the aforementioned Jersey barriers. I managed to scrub off some speed but still impacted at 72 km/h. My airbags deployed, and the car is a write-off, as can be seen from this photo. 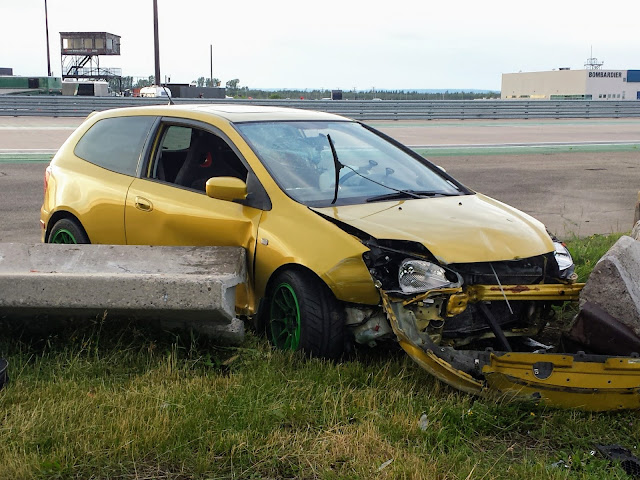 Physically, I was totally fine. However, I really feel quite stupid about the whole thing. I never realized how close that wall was to the fastest corners on the track, and I should have noticed this. I was gradually building up speed, as there were a few puddles on the track and I hadn't driven on track at all in five weeks. I let my competitive nature get hold of me after being passed by a BMW M2, and that was just foolish. I should have continued to build speed gradually and see how the car was behaving.

My season is over and my car is gone, and I have no one to blame but myself. I will now focus on selling as many parts as I can from the wreck so I can afford to buy another Honda next season. This sucks!

Update: here is a video of the crash.

Posted by Vincent Basile at 2:44 PM No comments: