First time camping as a family!

Alex and I had decided that this was the year we were going to try to take the boys camping. We decided to let our friend Nico, an experienced camper and father of two, reserve the campground. We would be joined by another couple, Mathieu and Morgan, with their two kids. The place Nico chose was very family friendly in that is had a beach and a playground. It was not a "hardcore" place in the woods, and most of its clientele seemed to have installed their trailers there in a more or less permanent fashion. There were only a handful of tent campers like us.

We had planned to spend one night, and then "see how it goes" before committing to a second night. I hadn't realized it at the time, but Alex pretty much assumed we were only staying one night. I, on the other hand, thought that after all the work of packing the car, setting up the tent and everything, we might as well stay the second night, especially since the Monday was a holiday and we would have plenty of time to recover at home. Somehow, my view of things won out and we stayed for two nights.

We set up Oscar's travel bed in our tent, along with a queen-sized inflatable mattress where Jules, Alex and I would sleep. Each person had a sleeping bag and the system worked pretty well. We went for a canoe ride and I accidentally tipped the canoe when getting in, sending Jules and Morgan into the water (sorry guys!). Everyone was wearing life jackets and the weather was warm, so it was not that big a deal. Still, I felt bad when I saw Jules shivering while he dried off in the sun.

Other than that, we cooked on a portable BBQ and on the fire and everyone had a good time. We were home early enough on Sunday to enjoy a leisurely walk in Outremont. 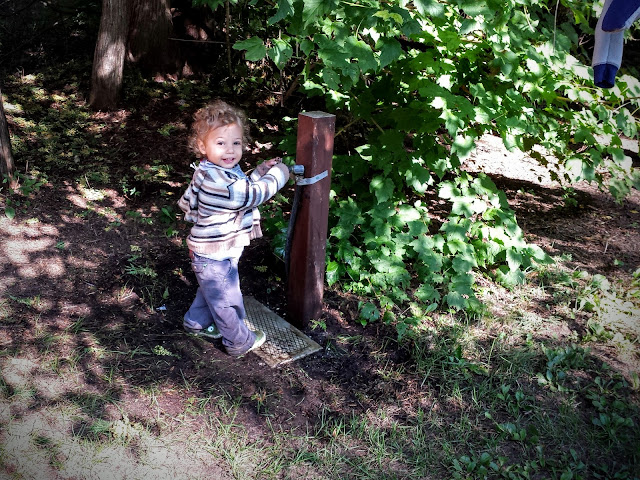 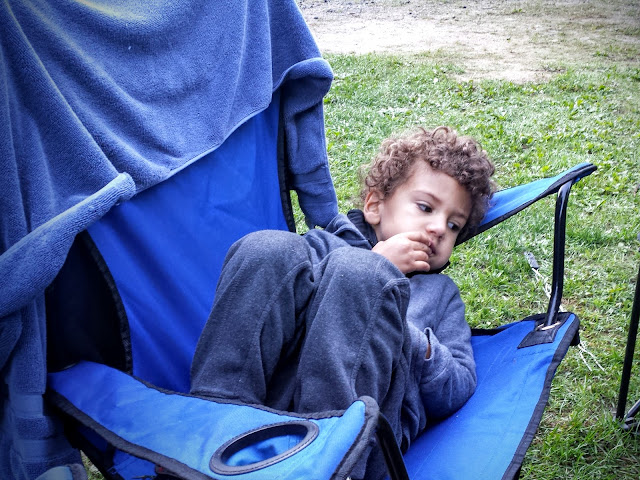 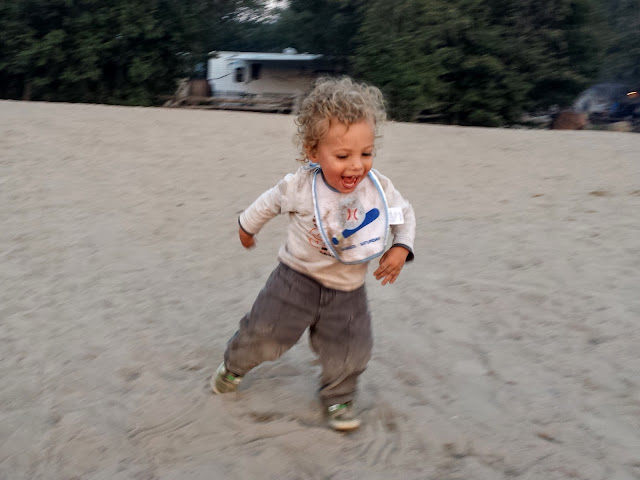 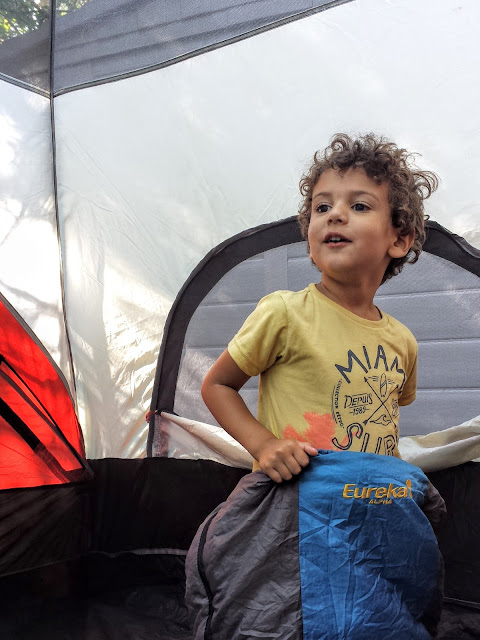 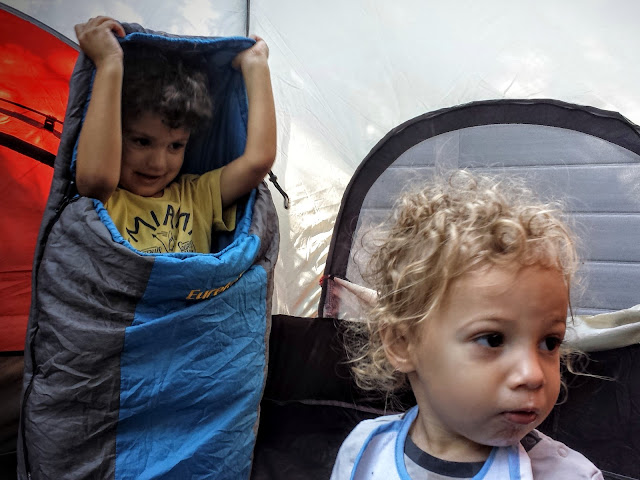 To my surprise, during this leisurely walk, we came upon a small car show, or concours, in one of the parks we usually go to with the boys. It was a very small show, with mostly "run of the mill" classics, but the one car that really stood out was this Bugatti Type 35. 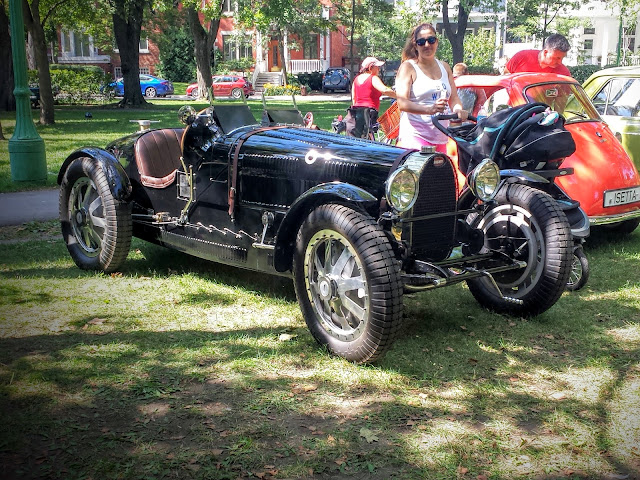 I looked all around the car for any sign that it was a replica, and could not see any (based on my limited knowledge of pre-war sports cars). I posted some photos on Facebook and the consensus seemed to be that it was a "Pur Sang", a near-perfect replica built by a company in Argentina that restores classic Bugatti's. The company is so well-respected that it inspired the Pur Sang edition of the modern Bugatti Veyron. Even though it was a replica (a 250 000 $ one, mind you), I found the car to be very impressive.

Here are some of the more common classics that were on hand: 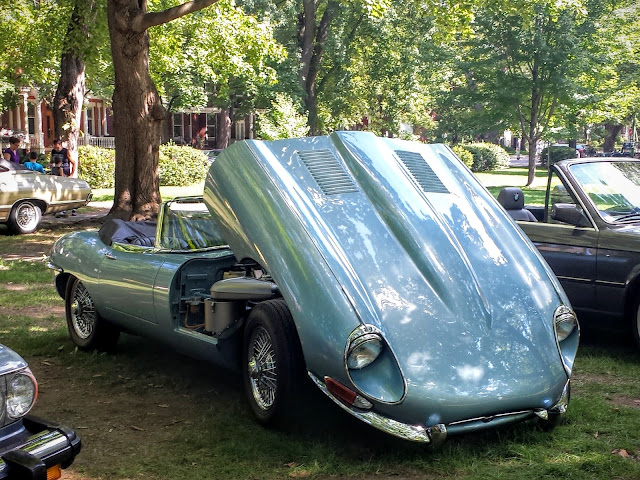 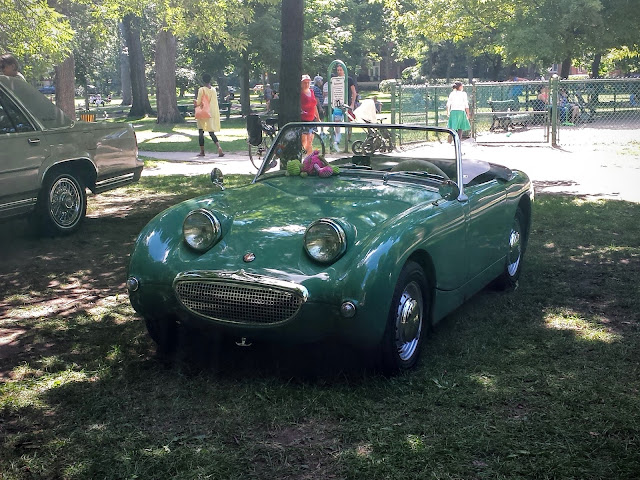 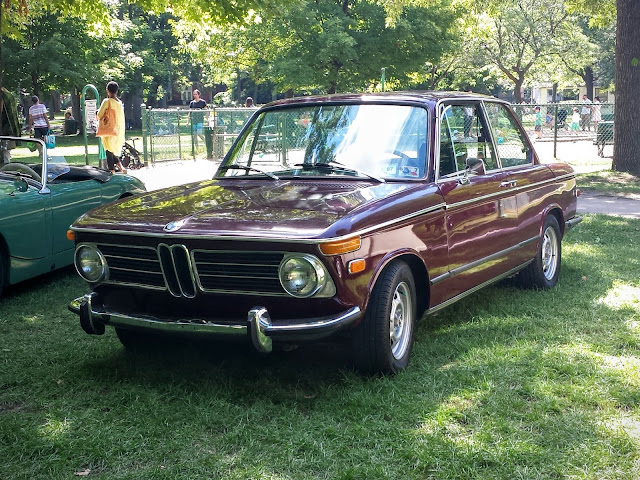 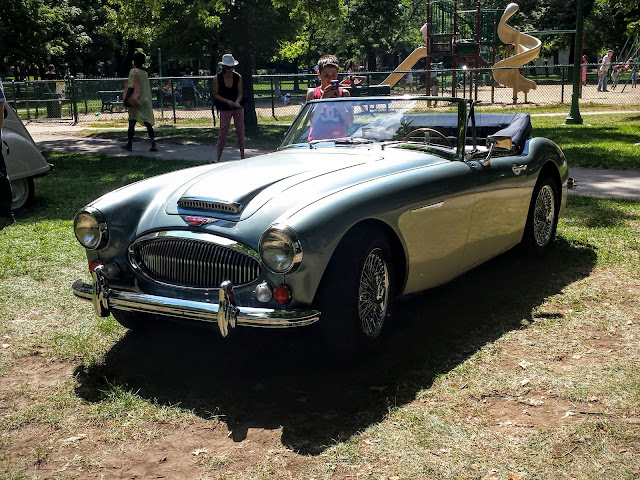 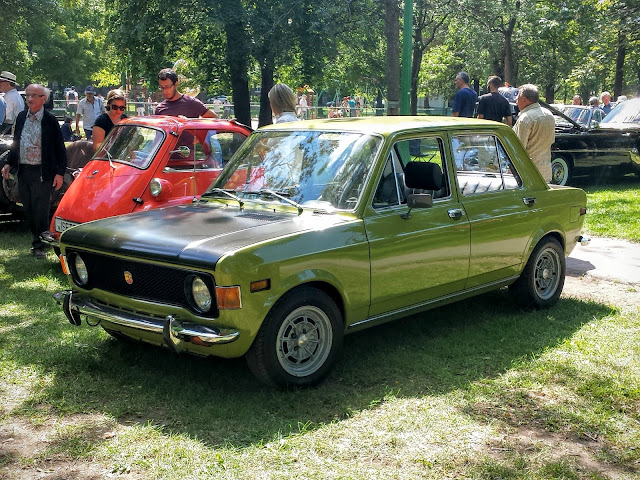 Finally, here are some other spots from the past couple of weeks:

Posted by Vincent Basile at 10:59 AM No comments:

A few weeks ago, the Quebec racing community lost one of the nicest guys you could ever hope to meet at a race track. Stéphane Boutin succumbed to cancer at only 48 years old, and when my race buddies and I found out about it, we were shocked and deeply saddened... we had all known that Stéphan had cancer, but we (maybe naively) thought that he was in remission, as he had begun to make appearances at the track once in a while to hang out and say hello. He even came to our AISA race school at St-Eustache in April and had his friend Dave take this photo beside my then-newly-acquired Civic (I took it to mean he approved of my choice). 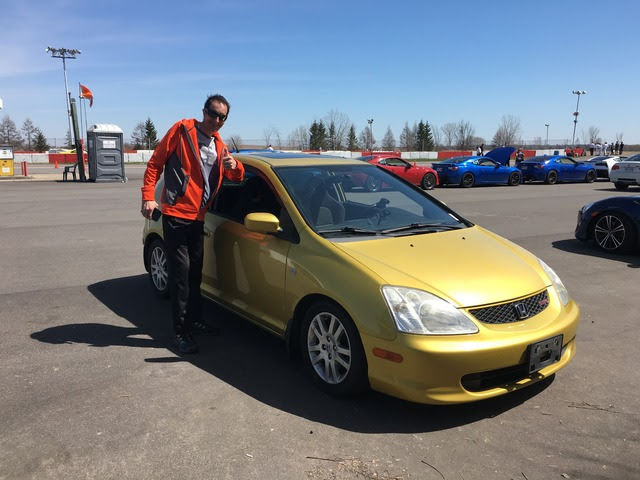 On the Monday after the funeral, Carl chose to organize a lap of honour in his memory. The lead car was Stéphane's first track car, a Honda Prelude, which is now owned by his friend Marco. Over 60 cars took to the track for this lap. I believe it was a fit tribute to a really great guy. Stéphane, you will be missed. 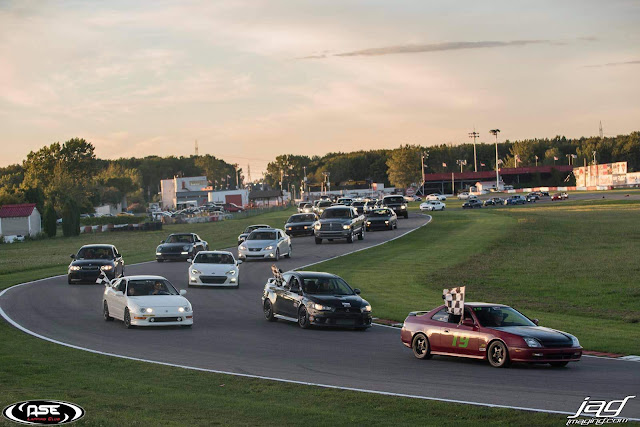 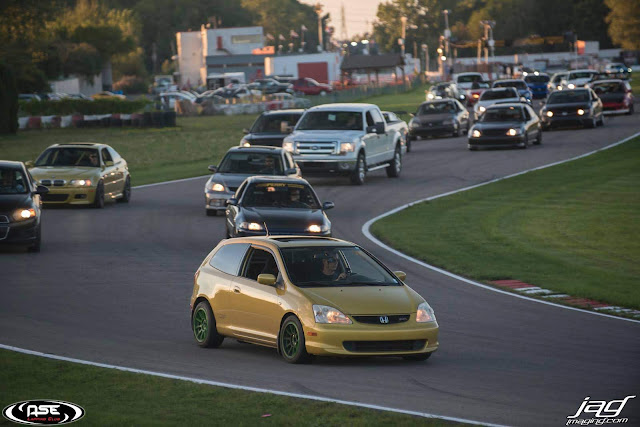 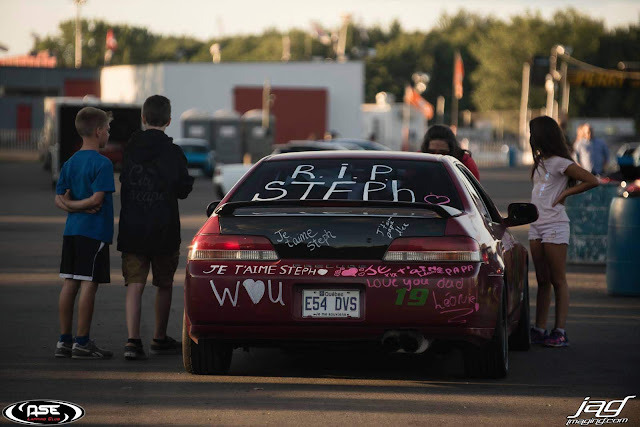 Posted by Vincent Basile at 9:37 AM No comments:

A few weeks ago, I decided to try to find a track event somewhere I had never been before, to experience something new. I found an event held by the a club called Sunday Cup that was to be held at a small track about 45 minutes away from Quebec City called Autodrome Montmagny. It was an oval track that was recently expanded to a road circuit. My friend Will, who lives in a Quebec suburb, would share the car with me and the whole family would come along for the weekend. On Friday afternoon, I loaded up the car, picked up the boys and then Alex, and we were off to Quebec City.

On Saturday morning, Will, his oldest boy Charles-Riddick and I drove to the track. The plan was for the rest of our families to join us later. We signed in and could see that it was a low-key event where everybody just wanted to have some fun.  In addition to Civics and BMW's, there were some interesting and unexpected cars, including a turbo Toyota Tercel, a Toyota Paseo track car, and even a Chrysler Crossfire. There were also about 20 Miatas, as a Miata club was sharing the day with the Sunday Cup gang.

I had watched some video online to get an idea about the track. The lap time was well under a minute and the layout utilized about three quarters of the oval track. At the exit of the oval, there was a chicane with a sharp drop in elevation, like a miniature version of the corkscrew at Laguna Seca. It was not clear to me where one was supposed to brake for that corner, but I figured we would learn soon enough.

Will went out first and came back in smiling. He had managed a lap in the 55-second range, not really pushing the car as he had never driven it on track before. Also, he had his son with him in the car. I went out in my session and also enjoyed myself. After a couple of laps, I realized that I had not been shifting gears... at all. I was just leaving it in third, and this seemed to be working. There were corners that were slow enough for second gear, but none of them were followed by areas where strong acceleration would have been useful (they were just followed by other sharp corners). In a later session, I tried using second gear in a couple of places, but I concluded it was best to just run the whole lap in third gear. GPS data revealed that the lowest speed attained in a lap was 63 km/h, while my top speed was 130 km/h. I was having fun with the mini-corkscrew, as I realized that even on those laps where I screwed it up by coming in from the wrong angle (which happened often, given that it was a blind corner), there were no real consequences, as I just had to use more brakes to correct my mistake. Also, it helped that the car has ABS. I had bought a new pair of tires, Hankook RS-3's, which I installed on the front of the car, relegating another pair of now quite used RS-3's to the rear, replacing my very worn Bridgestone RE71R's. With the all-Hankook setup, the car was more neutral-handling. The rear could be provoked to let loose a bit with a lift of the throttle mid-corner, which was not the case with the sticky RE71R's in back. (I went to St-Eustache Monday and confirmed that indeed the car was more neutral).

My second session was organized like a race, with the cars gridded 2 by 2 and following a pace car. They call this the Gentleman's Race. We were allowed to pass without point-bys on the first 2 laps. I was gridded last, as I had to wait for Will to arrive from his session. When the green flag dropped after the pace lap, I made sure I was in second gear and I immediately passed the two cars ahead of me. Then I settled in behind the suprisingly quick Paseo, which I eventually passed when he drifted a little too much in the oval. I managed to catch and pass a Golf GTi later on, but as my tires began to overheat, he re-passed me. My best lap was a 53.0. Will had done a 53.8 in his session. I figured a 52-flat was possible.

After lunch, we each had 5(!) more sessions available to us and we made the most of it. The rest of our families showed up for lunch and we were geneerally enjoying ourselves. I managed to get down to a 52.4, but could do no better. I was finally really pushing it in the oval, the tires screaming all the way through the long 180-degree corner, and I figured there was not a lot more I could do to gain the last few tenths of a second. We both decided to skip the last session so we could meet our families for dinner in St-Jean-Portjoli, where Will's mother-in-law lived.

The day was a success from our perspective. The car performed flawlessly. We had no off-track excursions. We were physically tired and very satisfied. We were back at Will's house a t a reasonable hour Saturday night and took it easy on Sunday before heading home for dinner time. Thanks to Will and his wife Marie-Hélène, as well as Alex, for making this mini road-trip into a memorable weekend.

Here is a video of the Gentleman Race filmed from the Civic:

Posted by Vincent Basile at 1:15 PM No comments: