It's only been a few days since Jules' second birthday and he is already hitting another milestone: his first day at daycare. We've started him off with half days, actually, and hope to have him up to full days next week. He cries when we drop him off, which is sad, but apparently he is doing OK after we leave.

Here he is just before his first day Monday: 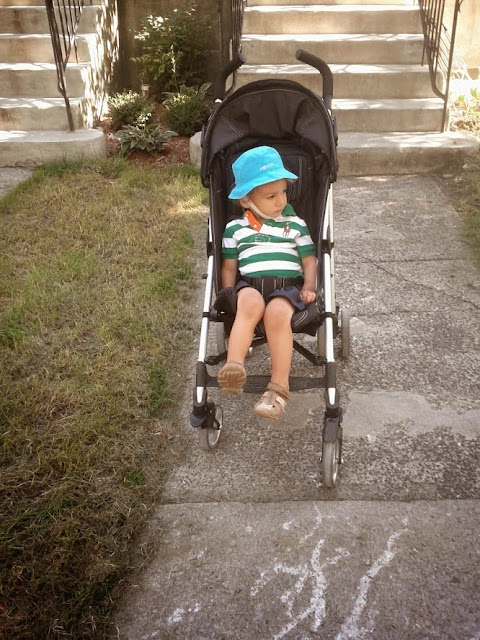 Later Monday, I headed to St-Eustache with the now reliable (knock on wood!) Civic. I told Pascal I wanted to follow him around for motivation so I could finally break my record and lap the track in under one minute. Pascal regularly laps in under a minute. I even removed the passenger seat to maximize my chances. Although we had a blast lapping together, we did not his the magic number of 59 seconds (my best of the day was 1:00.6). Maybe I will have a better chance when it's cooler out, as it was 28 degrees and very humid. I put together this video of our attempt.

Here is a photo I took before heading out

And here is a photo that was posted on MontrealRacing:
I really hope I can break my lap record this season, but I don't want it to be all about lap times. I want to have fun and generally improve my driving.

There are always interesting cars in and around Montreal, as can be seen from these photos.

Posted by Vincent Basile at 4:19 PM No comments:

A rare photo of both cars 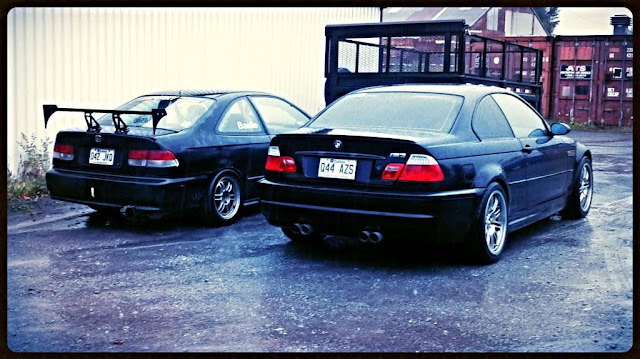 Posted by Vincent Basile at 11:09 AM No comments:

Here are some of the results after playing with a photo from last Monday on the Photobucket editor: 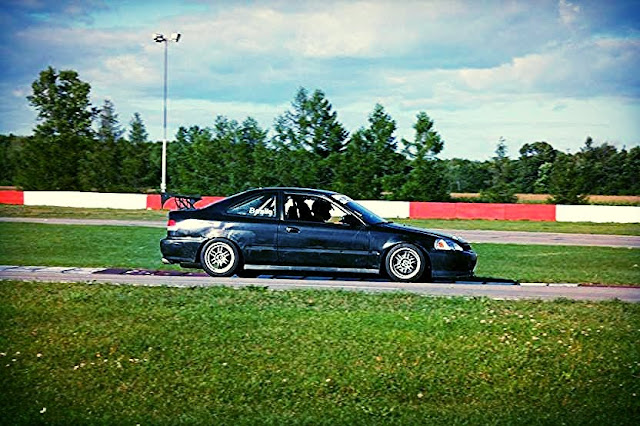 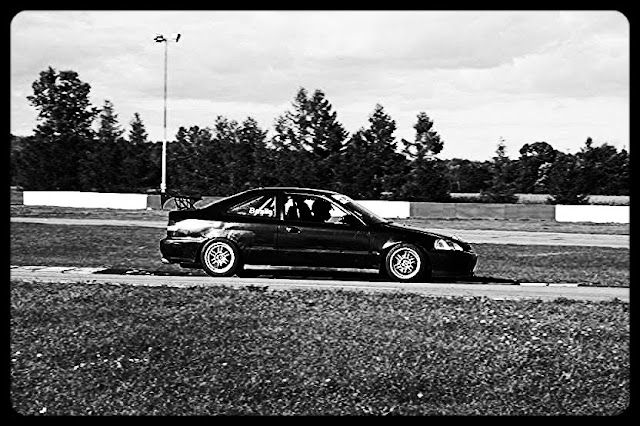 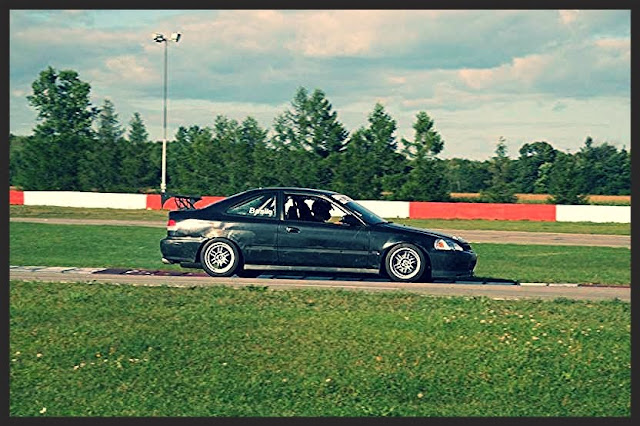 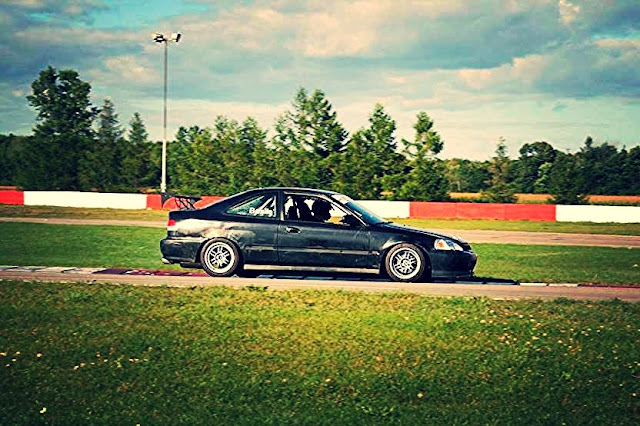 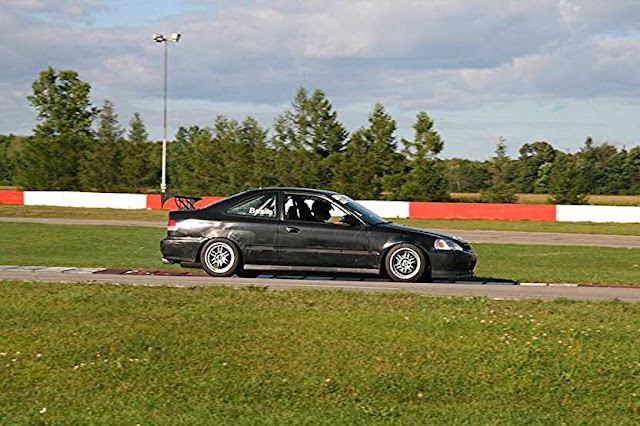 Posted by Vincent Basile at 12:22 PM No comments:

For the first time this season, I was able to attend a Monday night lapping event with no breakages on the Civic (except for the front lip, which was destroyed at home while trying to drive through the construction on my streer). Pat made me a bracket to hold the header to the engine block and so far, this seems to have worked. I drove in three sessions. In the first two, I was using the mostly dead Hankook RS3's. I still managed to shave a few tenths off my time from a couple of weeks ago, getting down to 1:01.7. I later switched to some much less used BFGoodrich G-Force Rivals (in 205-50-15) and got down to a 1:01.1. I still need to improve my driving before I will see a sub one-minute lap time, but I feel that I will be able to do it, with practice. I am using different gears in almost every corner, due to the fact that I have an extra 35 lb-ft of torque and a 7400 rpm redline (instead of 8400). The fact that I am not using second gear at all should help the longevity of my transmission.

I had two good students, one with a Mercedes SLK230 and one with a 1996 Nissan 300 ZX non-turbo. In the 300 ZX, we were driving behind another student in a 350Z, who happened to be my student's father (and the owner of both cars!). I bet he was a bit surprised at how we were able to keep on his bumper, despite the power disadvantage.

Another good thing happened Monday: I got my repaired camera lens back (the repair, although not 100%, was free... thanks Sigma!). I grabbed a few quick shots around the paddock. There is a wide variety of cars this year, as can be seen from these few photos.


And here is a video of some of my best laps:

Posted by Vincent Basile at 12:17 PM No comments:

A few days ago we enjoyed a mini vacation in St-Adolphe-d'Howard, about 90 km north of Montreal. For me, the highlight was the beautiful lake over which we had a lovely view. It was actually warm enough to swim in it. I think that the highlight for Jules was that there were three other kids there to play with. He also seemed to quite enjoy himself at the "Village du Père Noel" amusement park (with the exception of the petting zoo, which scared him a little...). I would definitely rent this chalet again in the future. 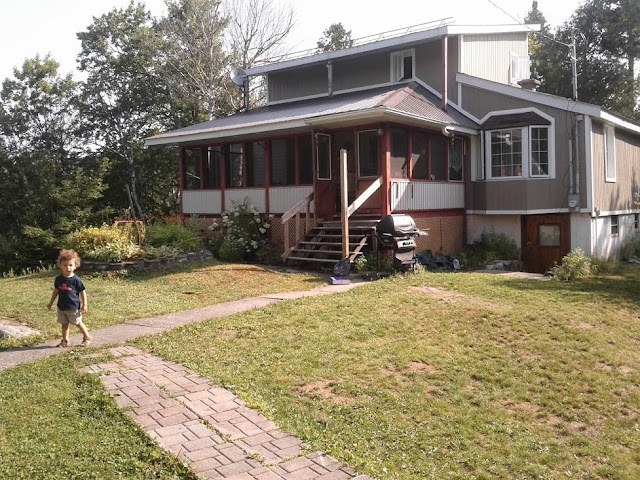 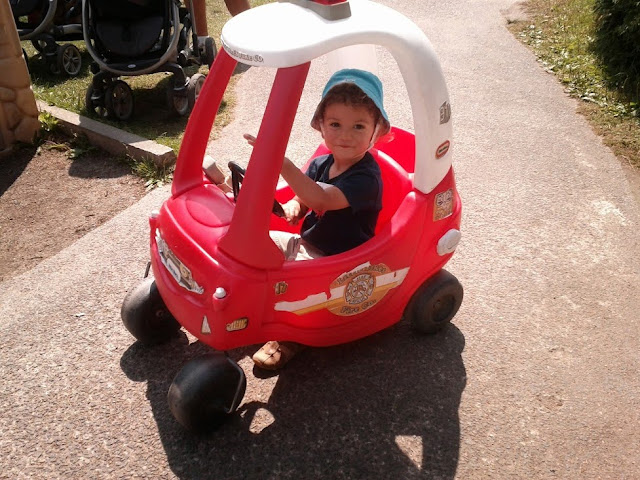 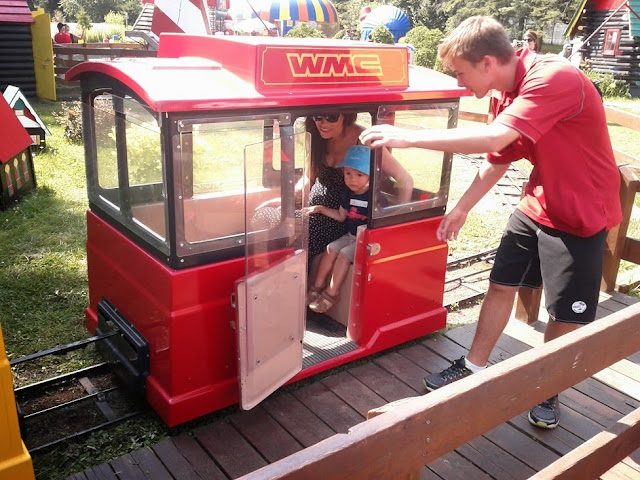 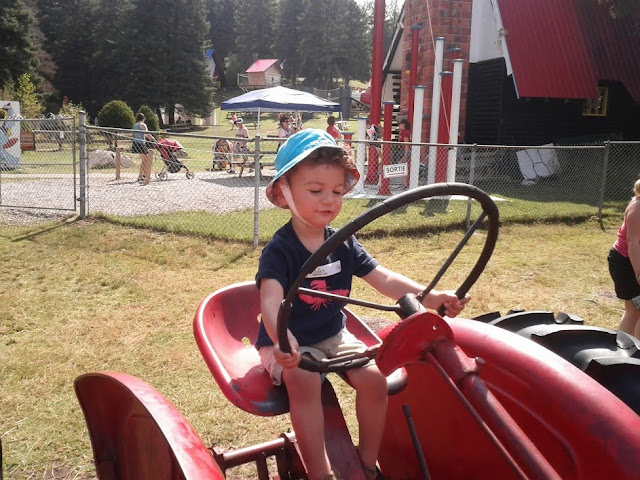 Posted by Vincent Basile at 12:03 PM No comments:

I can't believe Jules is already 2!

We organized a birthday party for Jules at home with a few of his little friends. Here is Jules sort of enjoying some home-made cake. 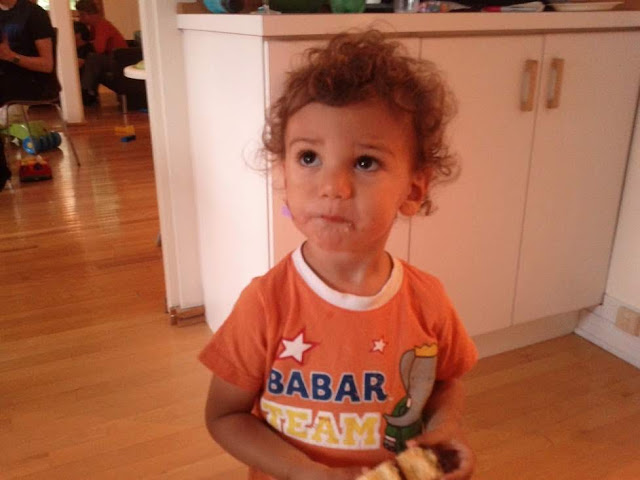 The following day, there was a family party at my parents's house, where Jules was clearly enjoying his birthday cupcake (home made by Val!). 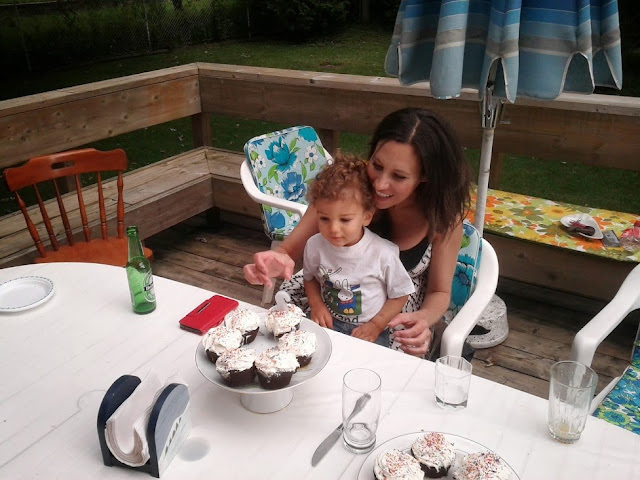 He now has a bunch of new toys and books... they barely even fit in the playroom. Happy birthday to our special little guy. We love you! 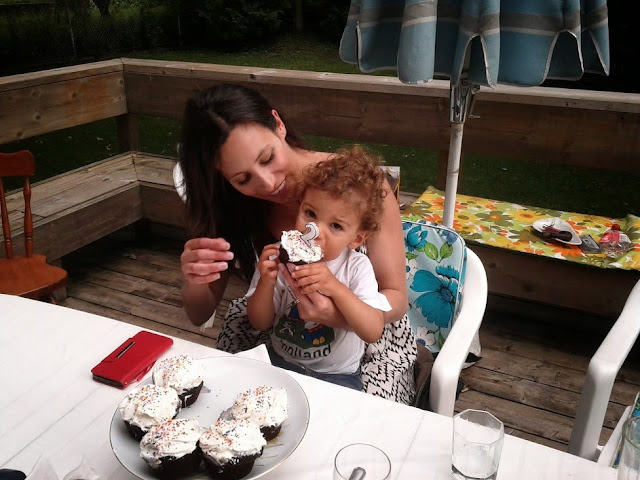 Posted by Vincent Basile at 10:27 AM No comments:

In the past few days, I have spotted a couple of rarities from the 80's and 90's, rare because there are so few left or rare because of their colour or condition. Enjoy!


Posted by Vincent Basile at 10:41 AM No comments:

Posted by Vincent Basile at 2:03 PM No comments:

Been on track two more times

As I am trying to sort the Civic and get some track time before summer ends (it goes by so fast!), I arranged to meet my friend Will and my mechanic and friend Pat at Sanair last Sunday. Anyobody can take his or her car on track there for 100$. There are no flaggers and few rules. Despite this, things seemed to run rather smoothly. There were 6 or 7 other cars, many Hondas, a couple of Subarus and a Hyundai. Will hadn't driven on track for a couple of years, so I took him out as a passenger for a few laps. We started out on the SPC series tires, which are not very sticky. The car seemed to perform well on the bumpy track and was fast on the long straight. Pat arrived and went out for a few laps with his dad. He was quick right off the bat (he usually is) with a time of 1:01.5. We swapped onto some Hankook RS3's, but the car was not much faster. I managed only a 1:01.2. This leads me to believe that my RS3's are well past their prime. This would also explain my poor lap times last season on these same tires. After half a session on the Hankooks, I heard the now familiar sound of exhaust coming out of a crack in the header. I pulled over and, sure enough, the header had cracked on the opposite side of the week before. We decided to let Will run anyway until there was no more gas, and he managed to get quite comfortable with the car by the end of his last session. We headed back to Pat's garage and he repaired the header for a second time.

When I got home and looked at the data from the G2X, I saw that we hit 185 km/h on the straightaway. I had no basis for comparison, but this seemed pretty fast to me.

I decided to take the car to St-Eustache lapping the very next day. The car behaved normally, but there seemed to be very little front end grip. My best lap was a 1:02.4. I was hoping to already be in the 1:01's, but it was not to be. After about 10 laps, I again heard an exhaust leak. I pulled off the track and looked under the car, and indeed, there was a third breakage in the stupid header! I decided to go out again despite this. On my second lap, I managed a 1:02.3, but the tires seemed as if they had had enough and I never matched that time afterwards. On top of that, the temperature had started to creep up (maybe I was running lean with a hole in the header?) so I decided to call it quits and head home.

When I looked at my video to see my speeds at various points on track, I could see that the cornering speeds were quite bad everywhere. This seems to me to be the final proof that these tires are finished. One encouraging note: I reached a top speed of 155 km/h on the front straight, 5 km/h faster than ever before, with any engine. The car is harder to drive at St-Eustache with no power steering, but I think that once the engine is tuned (coming soon) and I bring some fresher rubber, it will just be a matter of taming the beast.


So now the car needs a repair to the header and to have the header fixed to the block somehow. I would also like to eliminate the rattle in the exhaust and get some decent tires. The ECU needs to be tuned, but I have an appointment on August 13th for that. On the plus side, the car handles well and is properly aligned and the corner weights are not bad.

Posted by Vincent Basile at 11:01 AM No comments: