I found this old photo by JAG at St-Eustache... I like the way you can see the tires working. 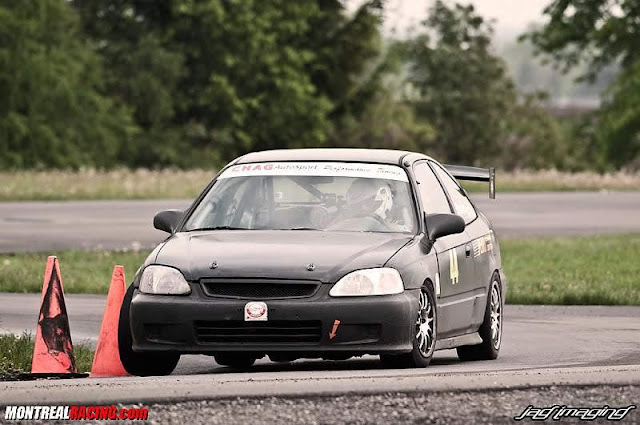 Posted by Vincent Basile at 10:01 AM No comments:

I visited the Auto Show yesterday with Jules and my mom. This was J's second car show, as he attended last year when he was 5 months old. This year, he was able to enjoy more than just the bright lights. He now knows how to say "car" and he quite enjoyed walking around the show, especially if there were little ramps where he could go up and down.

The show itself was nothing special, but I got to see in person some cars I had only seen online, like the Dodge Viper, Jaguar F-Type Coupe, Porsche 991 Turbo, BMW M3 and M4 and BMW 2-series. It was a pleasant afternoon and we all had a nice time. Here are a few photos.

The holidays are over and everyone is back to work. It's freezing cold these days... still, Alex and I had a nice little trip to Ogunquit between Christmas and New Year's. For the first time ever (for me), there was snow on the ground in coastal Maine. Still, the temperature was several degrees warmer than Montreal, and we enjoyed lovely walks on the beach, as usual. It was our first trip without Jules, but everyone survived. My mother did a great job taking care of  him. The M3 threw a few codes while we were gone, but I cleared them with a scanner and they haven't returned.

I managed to go for a run on the mountain with Jules in the stroller last weekend (on the only day it was above zero), but after 8 km, he lost all interest and would only stop crying if I held him in my arms. It was a long walk back, as we were still almost 2 km from home! I don't think the walk in running clothes (no jacket) helped my little cold.

I am still waiting for my friend Pascal to take a look at my transmission for the Civic so that Pat can install my new engine. I can't wait for this project to be done and I really, really want the car to be done by early spring so I can try it at the race schools. As I will not be doing any racing in 2014, I will be using the Civic more as a weekend and track day car.  I have already removed all the stickers, and would like the car to look more like a tuned street car than a race car, for the time being. I have been reading up on my new engine and am quite excited about the performance potential.

Other than that, winter has reduced the number of sports cars we see on the road here. Still, I saw a Corvette the other day (respect!) and there are several Porsche 911 Carrera 4's out and about as well. With the roads littered with ice patches, it's not fun to drive anyway. It was much more fun in the snow!