Last track event of the year

Last Saturday I headed up to Tremblant in the Civic for a track day with the BMW Club of Quebec. After the track dried out, I had quite a fun time. Despite running on street tires, I was only a couple of tenths off my best ever lap (1:59.0).

Here is a short video:

Unfortunately, in one of the last sessions of the day, I was pushing a bit too much and I slid off track into the guard rail. The damage to the front was not serious and I was able to drive home. I'm sure glad I was not driving a more expensive car!

Here is the slightly crooked front end of the Civic now: 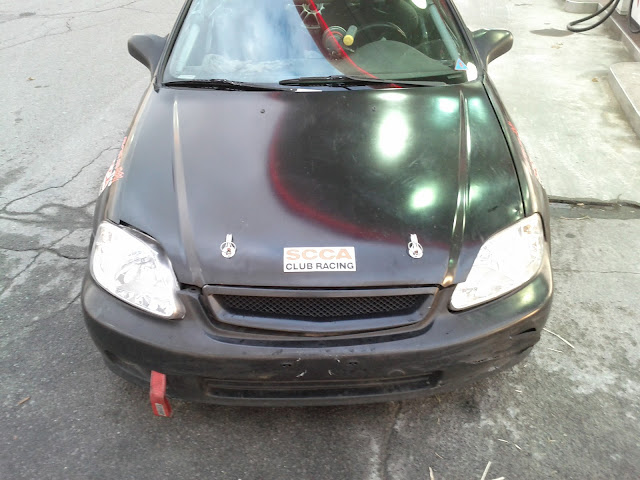 I've already ordered new fenders, a blumper cover and a radiator support, to be installed by the Boyers. The Civic should come back looking straighter than it has in years!

Here are a few more photos from the day: 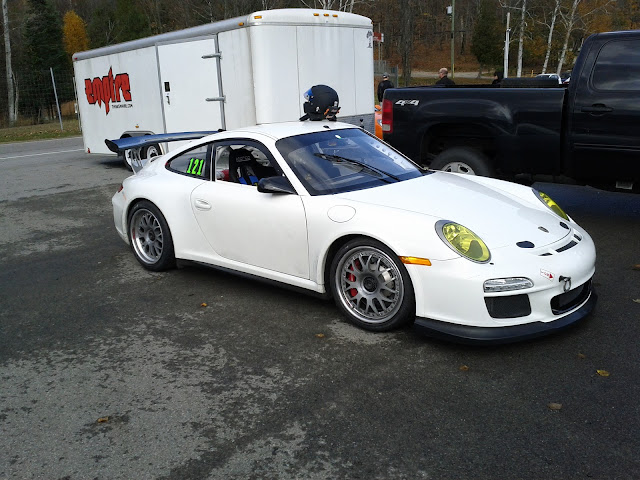 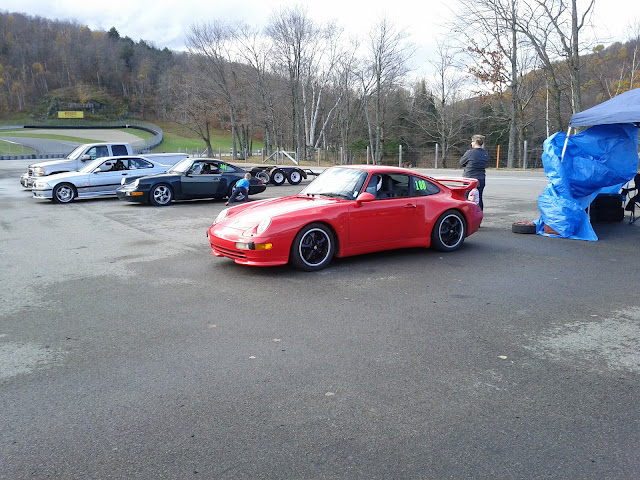 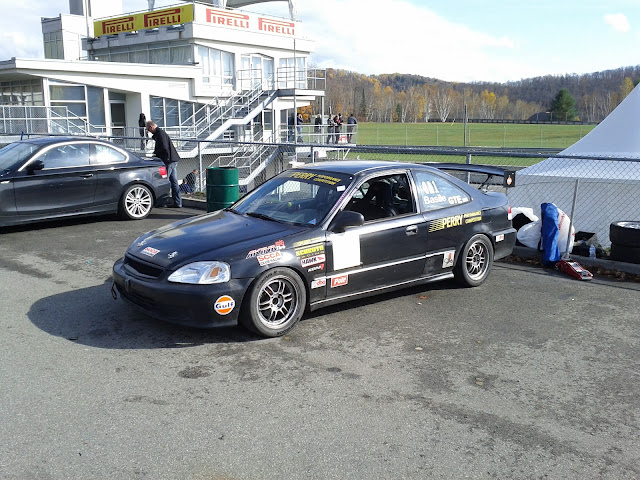 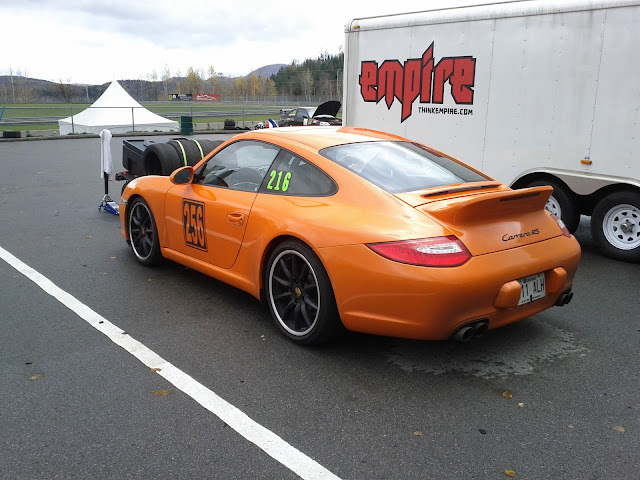 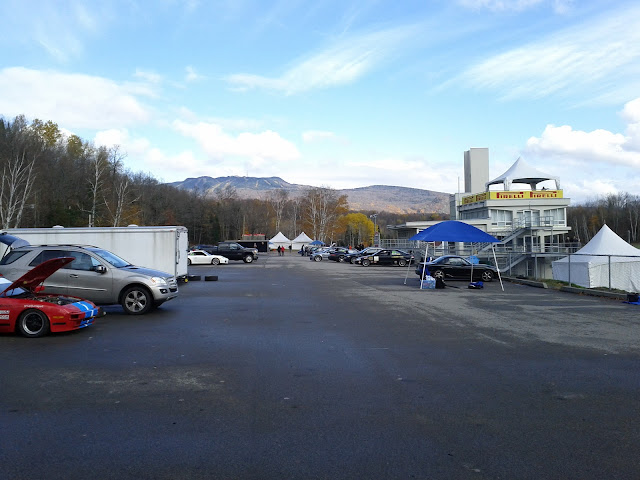 Posted by Vincent Basile at 11:48 AM No comments:

Most of my spare time is now taken up with baby tasks and trying to catch up on sleep. Still, Alex and I are doing well and Jules is becoming more and more “interactive”, which is fun for us.

A couple of pics if Jules:

On his play mat 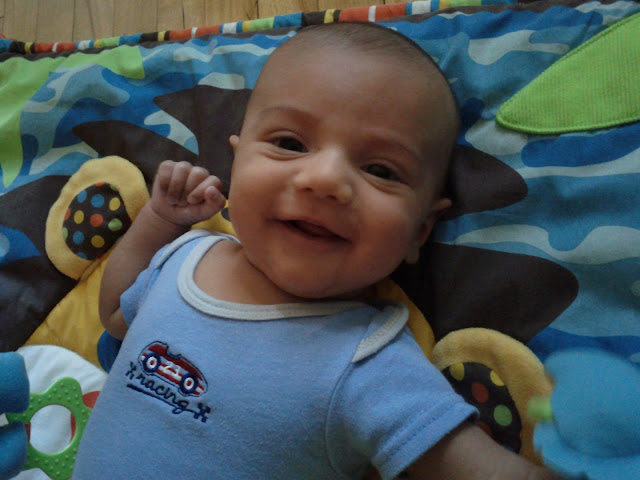 In his Polo outfit 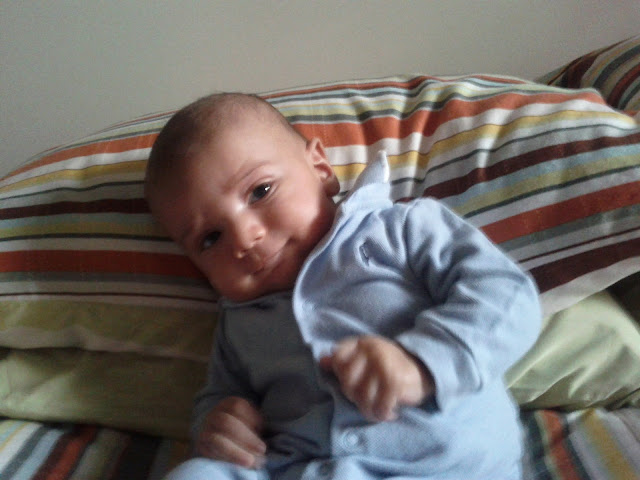 At Canadian Tire mounting some tires for the Civic 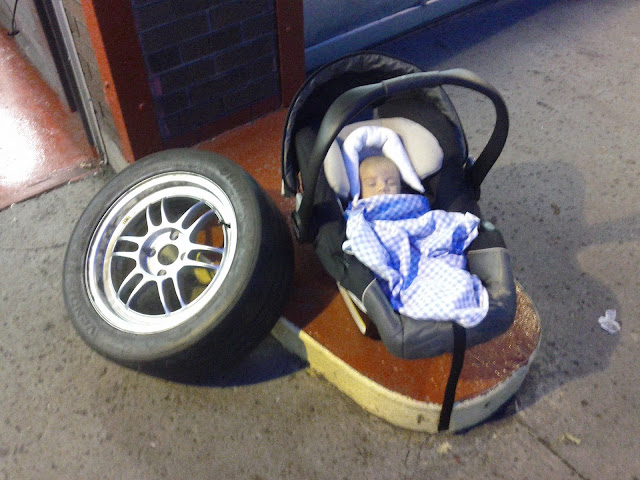 At Perry Auto in Laval checking out some race tires 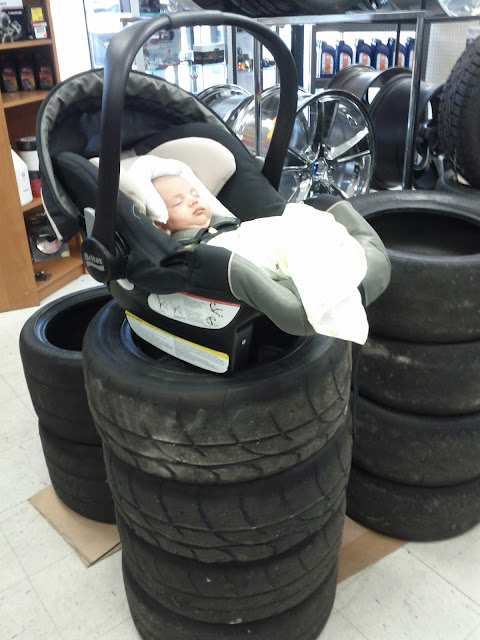 In the bath, maybe his favourite place of all 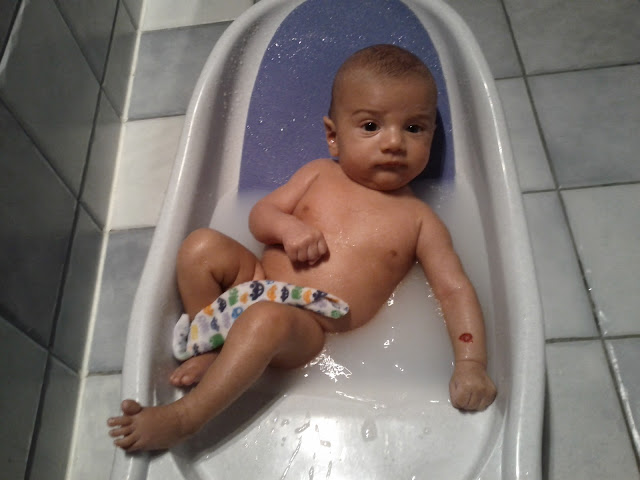 I did manage to head out to Monday night lapping this week, which was great. I managed to run three trouble-free sessions and, despite running on street tires (Hankook Ventus RS3’s), I managed my best lap time of the year (and, I believe, my best recorded lap ever), a 1:00.53. This was very satisfying after a two-month break from racing.

I also got to try out my new “bumper cam”. Here is a video I made:

There were a couple of cool cars on hand, including a new Maclaren. I was hoping to catch and pass it on the track (and capture this on video), but it pulled off the track after only a few laps. It was getting quite dark by then and I can’t blame the driver for shortening his session. 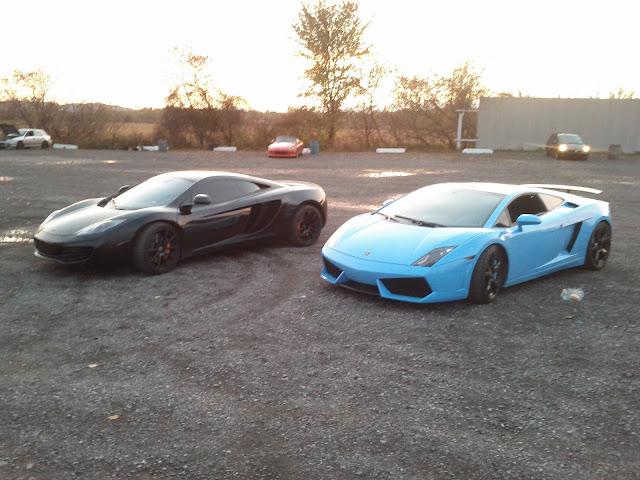 I will be heading to Tremblant this weekend with the Civic for what will most likely be the last track event of the year, with the BMW Club of Quebec. It should be pretty fun!

There are many cool cars still on the road. I saw my first Aston Martin Rapide… wow, what a nice sedan! The new BMW 6-series sedan is also quite nice. I also saw and heard a modified Fiat 500 Abarth… what a neat little car. It’s still too tall though. 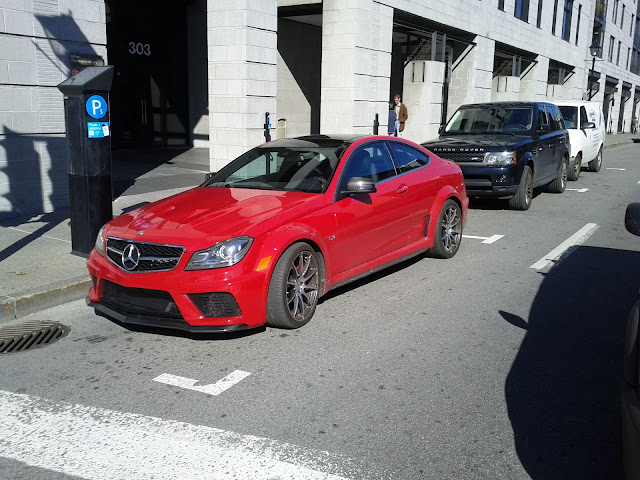 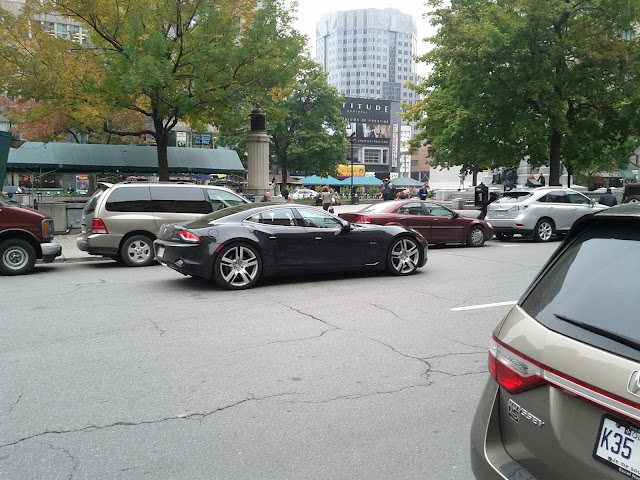 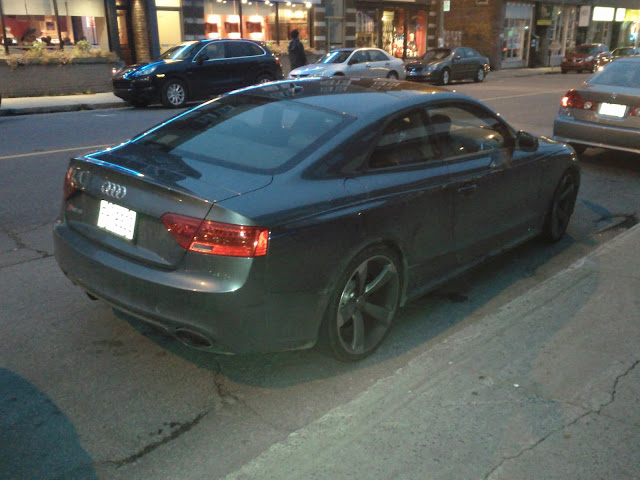 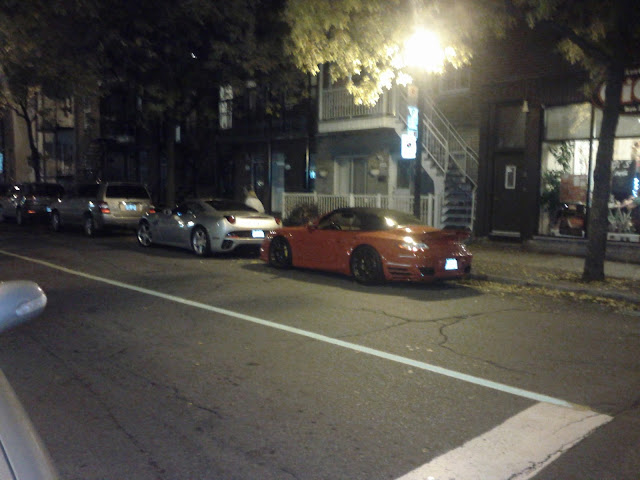 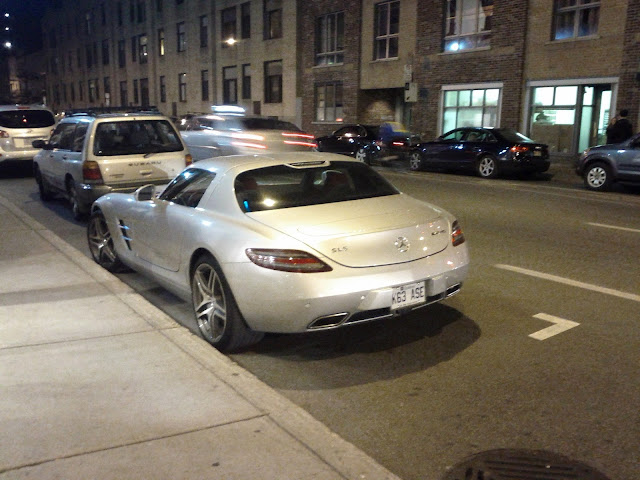 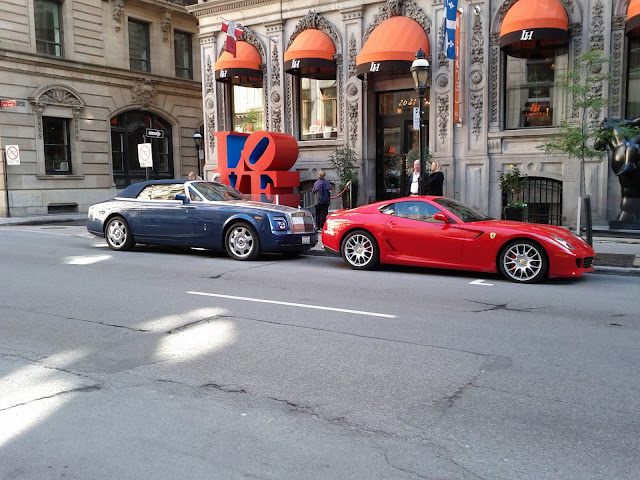 Anatomy of a Sunday

Maybe my ideal Sunday involves getting up at the crack of dawn and driving my race car to a track event. Although it is not really possible to head out to full-day events now that we have Jules to look after, I can still have a pretty cool Sunday, as I did today.

The day began when my alarm rang at 8:00 so I could watch the Japanese Grand Prix on TV. I set Jules up on the couch and we sat in front of the TV together. The race was not all that exciting, but I managed to get some work done and Jules was in a good mood. Breakfast consisted of 1/3 of yesterday’s baguette from Patisserie Gascogne, with butter and jam, and a glass of chocolate milk. Very satisfying.

I continued to work a bit after the race and play with Jules so Alex could catch up on some sleep. Then I decided to install the rear winter tires on the BMW. I already had the wheels, my breaker bar, my jack and my torque wrench handy so it seemed like it would be a 10-minute job. Of course, it never works out that way… I was not able to loosen the lug bolts on one of the wheels as the guys at Canadian Tire who repaired my flat tire a few weeks ago had tightened them way too much. I drove to the Canadian Tire where the work had been done, but the garage was closed, so I drove to a different store a few minutes further away. I was a bit annoyed, but it’s always fun to go for a drive in the M3. There were a couple of Ferraris (308, 355) parked on St-Laurent in Little Italy. I had the windows down and the sunroof open, even though it was only about 8 degrees. I saw a Corvette with the top down. Nice. People seemed to be driving in slow motion and I found myself driving around them. The short drive was oddly satisfying.

They were able to loosen the lug bolts for me at the other Canadian Tire and I retightened them by hand and headed home and finished the job, then dropped the tools and extra wheels at the garage. I was a bit sad as I saw the race car sitting in the garage, unused for the past two months. I took solace in the fact that I would have one more event this season with the Civic, at Tremblant in two weeks.

The 15-minute tire job had taken an hour, but when I headed back in the house, Alex and Jules hadn’t really noticed, as they were chilling. I went to Gascogne for another baguette and when I got home, I made a wonderful sandwich with prosciutto, provolone and Dijon mustard. I had some leftover pasta salad on the side. This was a near ideal lunch for me.

I watched some TV while Alex got ready for us to head out for a walk with Jules. We dressed him up more warmly than usual, as it was colder today than it’s been since he was born 7 weeks ago. We headed north on Parc avenue, then turned East into little Italy. There was a different Ferrari (Mondial T) and quite a few people walking around. It was not too warm but it was still a beautiful fall day. The leaves are changing colour and there are starting to be more than a few of them blowing around the streets and sidewalks. We popped into Jean-Talon Market and Alex bought some fancy-looking soups before we headed to Première Moisson to buy a cake to bring to tomorrow’s Thanksgiving dinner. Tomorrow is a holiday. The Sunday of a three-day weekend is a special day, sandwiched as it is between two other days off. It’s quite lovely! 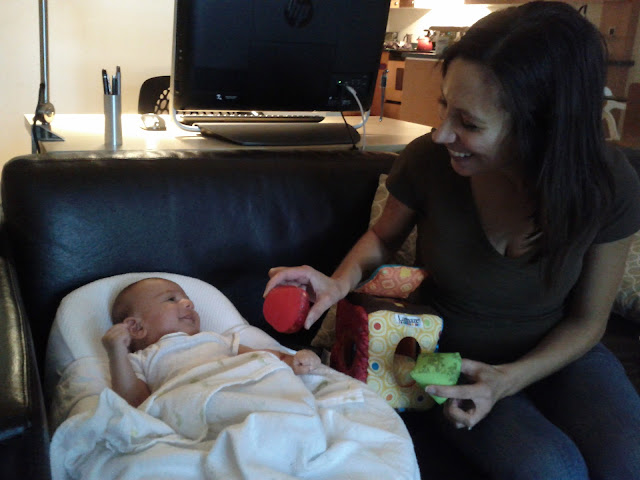 Our walk ended up lasting quite a while as we covered several kilometres. Jules slept in his stroller almost the whole time. Alex was glad to get the exercise. As we got home, Alex put Jules down for a nap and tried to get a few tasks done. I considered taking a nap, but decided it would make more sense to go for a run. We had been for a walk on Mount Royal yesterday and I could see that the conditions were ideal. I headed out at about 5:30 for my one-hour run and I never regretted choosing the run over the nap, even for a second. It was 12 degrees, which was a near perfect temperature for me. It’s great to head out for a run when you don’t have to worry about heat management. Although I have barely been running at all in the past months, my speed was pretty decent and I was feeling pretty good. There were throngs of people on the mountain, especially near the parking area near Beaver Lake. When I see these people dressed for winter conditions, I really wonder how much they get out of the house. I am so glad to live near the mountain!

I got home, feeling pretty good about the run, then had a shower. I was hungry and Alex told me to go ahead and eat on my own, so I could watch Jules while she ate. I reheated some leftover pasta and meatballs and made some garlic bread, enjoying baguette for the third time today. Alex ate while I tried to calm Jules down, but he was having none of it. He was in a particularly bad mood, so I decided to give him his bath at 7:30 instead of 8:30.  As I had hoped, the bath restored his good mood. I tried to stretch it out, but gave up when he pooped in the bath water. I finished getting him ready for bed and put him down at 8:30. He was asleep about 25 minutes later. Since we needed groceries for the week, I left Alex in charge again and headed to the nearby Provigo. I really should walk, as it’s only 10 minutes away, but I planned on buying a lot of stuff, so it was back into the BMW, blasting the reggae mix for the short drive. I love shopping at this store at night. It’s open until 11:00, but generally quite dead after 9:00. I was able to shop efficiently and was home after only 40 minutes. Alex informed me that Jules only woke up twice before he settled down for real, which is not bad. This allowed us both to work on our computers (and me to write this up). I am tired, but there is no pressure to go to bed, as there will be no alarm clock tomorrow. All in all, it was quite a satisfying day.
Posted by Vincent Basile at 1:39 PM No comments: