Alex and I bought smart phones a couple of weeks ago. Although I knew the differences between a smart phone and a regular dumb phone in theory, I have to say that I am astounded at all the things a smart phone can do. I knew I would be able to check my email and browse the net with the phone, I was not expecting it to be this easy to use and have this many features (I guess I should thank Android for that!).

The technology allows me to use the "speach to text" feature to dictate blog entries while I walk down the street.

I can also take some pretty decent photos with the phone and email them in seconds. I'm pretty impressed. Here is a photo I tool of Mount Royal on my walk to work this morning:

You can see from this photo that fall is here and most of the leaves have fallen. Last weekend, I put the winter tires on the BMW. The ride is much smoother with the winter tires. I was going to switch to the original equipment springs because I was sick of the harsh ride, but now I feel that I don't have to.


Here is another photo from the phone taken in front of Marché Bonsecours in Old Montreal (after a car wash):

My girls' basketball is gearing up for another season. They will play the first game in 2 weeks and, thanks to my excellent assistant coach, I think this will be the best prepared team I've ever had. My men's team has already played its first two games. We tied the first game after I missed two crucial foul shots at the end of regular time. I played better in the second game and we took a 20-0 lead. We held on to win by 20. The third game is coming up Friday.


I haven't been out for a run since the marathon. I am spending a lot of time on the couch and have been eating a lot of pasta. Not good!

The track season may be over...

The track season is winding down, with the last Monday night lapping session taking place this evening (I am still debating whether I will try to attend). The weather is clearly fall-like and a good percentage of the leaves have fallen off the trees.

The race car is getting a few repairs and a quieter exhaust in preparation for next season. The BMW is running well and Alex and I enjoyed a lovely 300 km drive through the Laurentians yesterday, in very mixed weather. We found some nice driving roads (the 125 and the 327), but nothing truly spectacular (I guess I am still looking for an awesome drive near Montreal). It will soon be time for winter tires!

There are still some cool cars out on the road though:

Here are some more great pictures from JAG Imaging taken at last weekend's ASE Lapping Club "Lap-n-Learn" day at St-Eustache, including one of me driving the Ford GT. 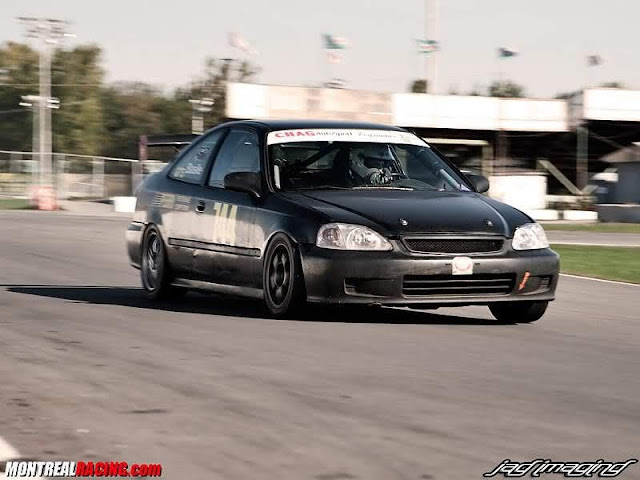 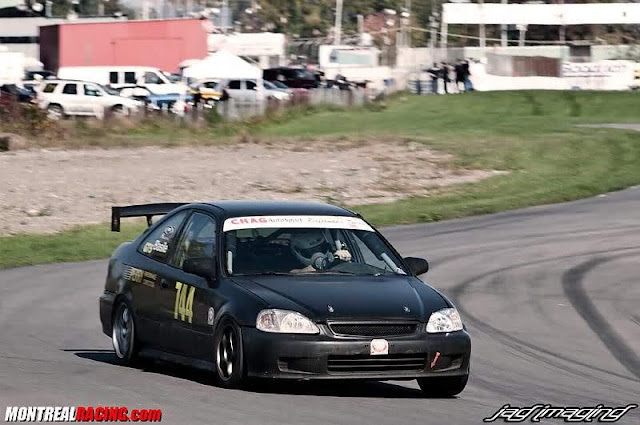 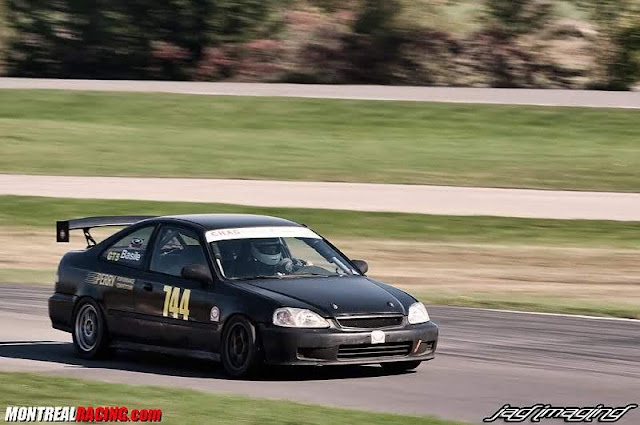 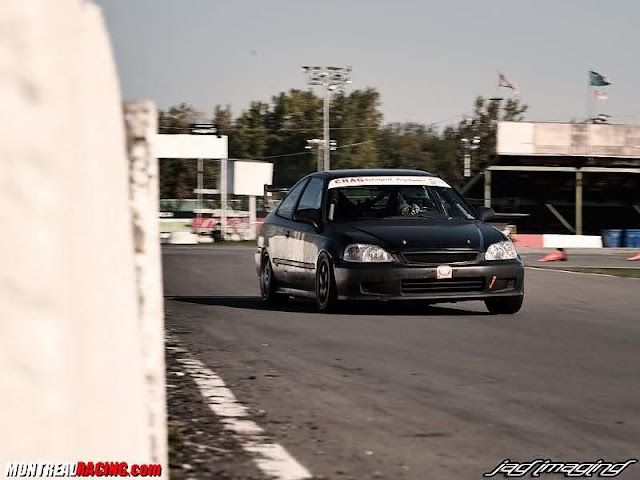 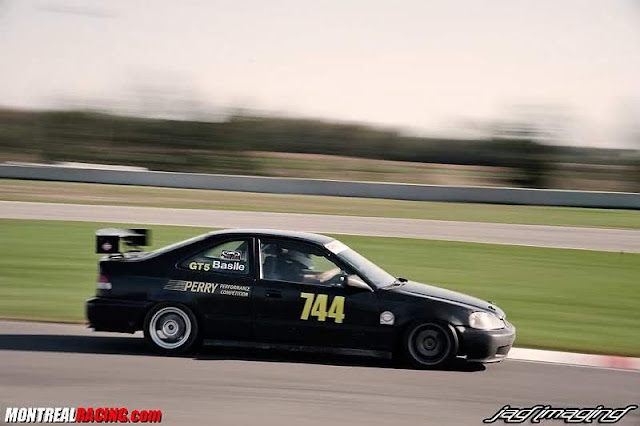 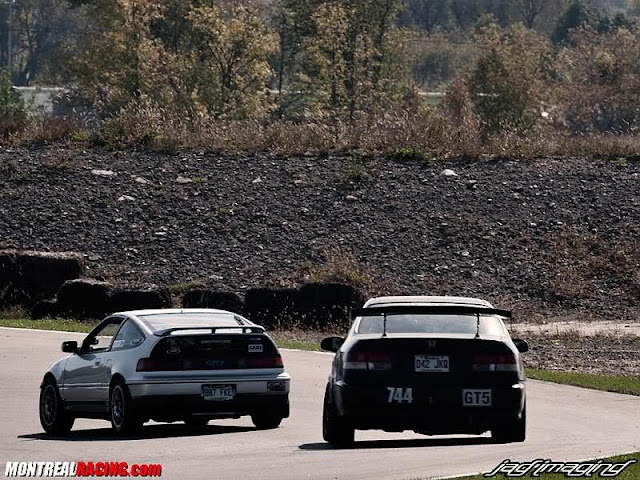 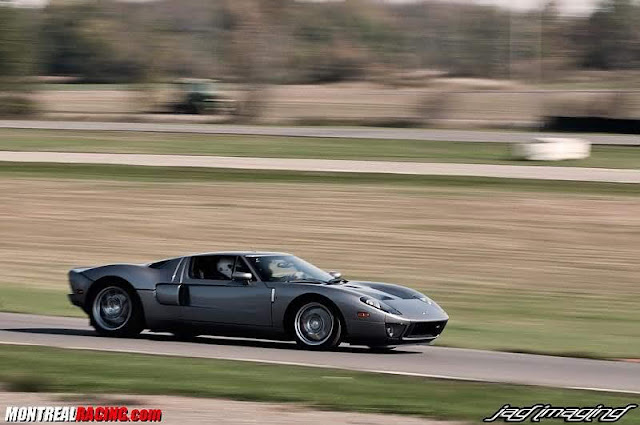 Posted by Vincent Basile at 12:11 PM No comments:

Yeterday, I attended a track day organized by the ASE Lapping Club at Mosport. My buddy JS and I planned to share the use of my Civic. The schedule provided for seven 30-minute sessions for each of us... a lot of miles on the car!

We drove down Sunday afternoon and enjoyed a fantastic BBQ at the track, organized by Carl and the gang. We headed to our hotel early enough to enjoy a good night's sleep and reappeared at the track in the morning. Most people had slept at the track.

There were some pretty serious cars at the event, including three Porsche GT3's, Corvettes (both Z06 and ZR1), Evo's and STi's, M3's and S4's, Lotus Seven replicas and a Supercharged Elise. There was also a bevy of Honda products. Here is a summary of my day:

Session 1: I headed out and took it pretty easy. The track was a bit "green" and there was not a ton of traction. Unfortunately, a combination of events led to a major crash. First, a Subaru blew a hose or an engine or something and dumped a bunch of coolant on the back straight. A short while later, a Porsche GT3 lost it near the end of the back straight, probably after driving through the spilled coolant, and probably travelling at over 200 km/h. By the time I approached the site of the crash, there were pieces of the Porsche all over the track, including a wheel. A fellow driver who had stopped before me was pointing to his empty fire extinguisher, so I pulled over and pulled out the extinguisher that is always in the Civic. This is the first time I have had to use in seven years. I emptied it into the GT3's engine bay, where a small fire had started. The car looked terrible, but the cockpit was largely intact and the driver and co-driver walked away. This left a lot of track to clean up: the coolant and the oil that leaked out of the crashed Porsche. Luckily, no one was hurt. We all pitched in to spread absorbant on the track and sweep it up.

Session 2: cancelled due to clean up.

Session 3: I managed to get some open track and hit a best lap time of 1:43.67, about 2.5 seconds slower than my personal best. I hoped I would get down into the 1:41's in one of the afternoon sessions.

Session 4: I notice that the front end (Toyo 888's borrowed from Pascal) was not gripping and that I could no longer drive flat out through turn 4. The grip was steadily worsening so I pulled in (best lap in the 1:46 range). I pulled off the front tires and they were both corded, the right one badly. Good thing I pulled in. That session was a waste! The proof that I am not close to the limit in turn 2: the car was not sliding at all, despite the corded front right tire! I have to remember this for my next visit to Mosport!

I put the rear tires on the front, and another pair of borrowed RA1's in the rear so JS could go out for his session. JS pitted in at the end of the session with an engine problem. The Civic sounded like a lawnmower and we quickly diagnosed a timing problem. After having concluded the timing belt was where it was supposed to be, we decided to check for spark in each cylinder. Someone suggested checking the cap and rotor first, and we did: the rotor had disintegrated in the cap. This was the cause of the problem. As I did not have a spare (no one else did either), my day was over. Still, it was not an expensive failure, so JS and I were not that disappointed. At the end of the day, Kevin gave us his cap and rotor, as his car would be leaving on a trailer.

All in all, it was a fun, super well organized day. I just hope I get in a few more laps before winter!
Posted by Vincent Basile at 6:33 PM No comments:

I attended an ASE Lapping Club Lap-N-Learn track day today and had quite a fun time. I brought the Civic so I could get some late-season track time. Rob was there with his E36 M3. I was assigned a student and he was driving this beast:
This meant that I got to drive the car for a few laps. I asked the driver if the traction control was of the "on/off" type, or of the variable setting type. He answered that there was no traction control. OK then! Obviously, I took it very easy out on track, but I still got a general idea of how the car performed. It was wide and stable and had good traction for a RWD. I didn't get to the upper end of the power band, but there was plenty of low-end torque, as one would imagine. The interior is of a lower quality than one would expect from a car in this price range (another student had an RX8, which has a nicer interior than the GT). The seats look cool, but i could really feel those plastic circles in the seat back in my t-shirt. The clutch action is a bit heavy and the shifter requires a firm hand, not unlike a Viper's. Over all, I liked the way the car drove. I absolutely loved the way the car looked, from any angle, and especially out on track when viewed from another car.

I went out for several sessions in my Civic. I had borrowed some tires from Pascal and the car felt more stable than last week. My best lap was a 1:02.00. Not bad, but almost 8/10ths off my best lap of the year. I also traded cars with Rob for one session. I had a blast in the E36. The car is so stable and it was no problem to run without traction control. According to Rob's timer, I managed a 1:03.8. I could almost drive it like a Civic, getting on the gas quite early without fear of spinning.

When Rob pulled in, he had broken an axle and lost the alternator belt (again!). It was time to call CAA.

When JP offered me a ride in his Civic, I couldn't say no. I headed out for 10 minutes of awesome fun. He has a stock B16a bottom end, but his big-valve ported head (my old one, in fact) on the block. It makes 171 wheel hp and 101 wheel torque. The result is a fun and responsive package. It was a pleasure to drive.

My car was towed to Marc's place nearby and Rob and I went to Pascal's to pick up a new axle he had been keeping as a spare. Rob's dad got us an alternator belt at Canadian Tire. The car is now at Marc's being fixed so I can head to Mosport tomorrow for Monday's ASE Lapping club track day. Stay tuned!
Posted by Vincent Basile at 11:03 PM No comments:

There was a low turnout for the final time attack of the season at St-Eustache. Time attack is basically a race against the clock. I participated and I can't say I performed that well. My best lap was a 1:02.287, a full second slower than my best lap of the season. I can't blame the conditions, as other Honda guys set their personal best laps (Maxo, Antoine and Pascal). This placed me last place in the FWD modified class. I also spun the car on two separate occasions (once, strangely, at the exit of the Carousel, and once at the hairpin in the rain with my slick tires) and had an off in the Carousel onto the grass on the outside of the corner. My driving was less than impressive. Luckily, there are a couple more driving events scheduled this weekend and I will not have to go into the winter months having ended my season on a bad note.
Posted by Vincent Basile at 3:58 PM No comments: