Regular season is over

My team's regular season ended last week on a high note and now, every other team in our league is done as well. We finished 2nd out of 6 teams. Before our last win, I was afraid we might end up third. It turns out the 3rd placed team, College Anjou, lost its last game, ending up with a 7 and 5 record. It looks like we will be playing Anjou in the semi-final in the next few days.

I have been trying to decide what to do with the race car this year. I have pretty much decided to leave it as is and just concentrate on attending as many events as possible. If any of my buddies want to team up with me, we can see about trying to find a little more horsepower.
The M3 is about to hit 110 000 kilometers. I am happy to say that the car remains problem-free. I cannot wait to drive this car on clean roads with some decent performance tires...
Cool cars spotted:
Audi RS4
Audi RS6 Avant
Audi S6 V10
Audi S8
AMG G55
AMG C63
Porsche 997 Carrera 4
Porsche Panamera Turbo
Bentley Continental
BMW E92 M3
Jaguar XKR
Volkswagen Corrado
Mitsubishi Lancer Evolution 1
Subaru Sti Sedan
Lexus ISF
Saab Turbo X
Posted by Vincent Basile at 7:28 PM No comments:

Today was the last regular season game for my girls' basketball team, the Diamonds . We were playing against the undefeated Regina Assumpta team, who had already beaten us twice in two meetings. On the first occasion, we lost by 10 points. On the second occasion, we were down 14-0 and I got a technical foul, but we still managed to keep it close and lose by only 5 points.
As far as the season was going, there was no way that we were going to catch up to Regina, who had a record of 10-0 with two games remaining. Our record was 8-3 with one game remaining. This would have us end up in second place behind Regina in our pool, and playing against Collège Anjou in the semi-final (the team that dealt us our third defeat). The outcome of this morning's game would make no difference as to where we or Regina ended up in the season standings. Still, I thought it was an important game, because if we make it to the league finals, it will likely be against Regina.
I was again fortunate enough to have Darlington drop by to give me a hand with the coaching. The girls showed up early and no key players were missing. The mood was light, and before the game, I tried to emphasize that if we could get off to a strong start defensively, we could win the game. I also told them that we did not need to win this game in an attempt to reduce the pressure.
The first minutes of the game were great for us. We were making very few mistakes on defense and this generated a few chances on offense. We were up 8-0 after a few minutes. I think that this situation made the girls nervous, as they were unexpectedly leading the first place team. They began to make mistakes, and the other team capitalized on them. Regina's players did not miss the easy shots we gave them. Their fans were cheering them loudly and we called a time out to get things back under control. This didn't really help, as the girls had lost their confidence. In a ridiculously short time, Regina built a huge lead on us. By halftime, we were down 28-10. This means that Regina went on a 28-2 run in the first half.
We tried not to be too hard on the girls at half time and decided to use our full-court trap in the second half. This aggressive defense had worked wonders in our first game at the tournament a couple of weeks ago, but had little effect against Langevin in our second game there. At this point, we really had nothing to lose, and I just hoped that we could claw our way back to a respectable score.
The pressure defense in fact worked wonders right from the get-go. Regina's players made one mistake after the other, either losing the ball to our defenders or throwing it out of bounds. We missed many easy shots, but it's better to make a few mistakes on offense than on defense. Regina's offense virtually shut down, and our top scorer took over our own offense. She even scored two three-pointers in two attempts (not bad for a girl about 5 feet tall!). Her second three-pointer, our team's third in a couple of minutes, put us into the lead. With 40 seconds to go in the game, we were still up by two points when the ref made a very questionable double-dribble call on our point guard after a Regina defender slapped the ball out of her hands. The end of the game was a real nail-biter... we were in the bonus and our top scorer got fouled with 23 seconds left, while we still had the two-point lead. She then missed both foul shots. The second miss was an airball and Regina had the ball on the side. Our girls managed to regain possession, and our top scorer was again fouled with 13 seconds remaining. Again, she missed both foul shots! Regina made it to the basket, but missed their last shot and we held on for an improbable two-point victory. The girls were jumping up and down in excitement. I couldn't believe they pulled it off, and I was beaming with pride. The Regina team looked dejected. I know it's petty of me, but I have to admit I was happy my girls managed to put an end to Regina's perfect season. The way the game unfolded was really like a Hollywood movie. In the second half, the Diamonds outscored the other team 29-9.
It was a fantastic end to our regular season, and no matter what happens from now on, I am proud of the girls, as they showed they could really rise to the occasion and play like stars. In the next few weeks, we will have another tournament (Jeanne-Mance) and our playoffs. If only I can find a way to motivate them to play like they did for most of the game today, they can have a great post-season. Regardless of the outcome, I hope that today's stunning victory will be etched in the memory of these 12 girls for a long time to come.
Posted by Vincent Basile at 10:06 PM No comments:

We're getting to that time of year when it feels like winter will never end. There is still not much car stuff going on. However, I did just receive a UPS shipment containing a recent Ebay purchase:

I felt like a kid at Christmas when I opened the boxes! Anyone with a keen eye might notice that these are the exact same wheels as those I now have on the car. Well... now I have a set for summer as well. Yay!

I know I am not very objective, but aren't these some of the coolest looking OEM wheels ever?

Moving to basketball, my men's team won last Friday in a real nail-biter. We were down by one point with 17 seconds to go and the other team had the ball, but a teammate managed to get a steal, then got fouled and scored both free throws. Then when the other team got the ball, they mistakenly called a time out when in fact they had none remaining. This earned them a technical foul and we scored two more points to win by 3. My offensive performance was less than stellar, but I played a strong defensive game. I focused on boxing out, thinking of the girls and how I have been trying to convince them to do it.

Speaking of the girls, we have our last regular-season game this Saturday against the undefeated first place team. I just hope that they can give it their all, so we will have no regrets.

In other news, Alex and I bought our plane tickets for our June vacation to China. I look forward to finally going to China after all these years working in Chinatown with mostly Chinese clients. Although there are no car activities planned (or even any driving!), it should be a great experience.

I just got home from the "Felins" basketball tournament in Repentigny. It has been a basketball-intensive week. Last Wednesday, we played a regular-season game against Joseph-François-Perreault and, despite a somewhat lackluster performance, managed a win, bringing our record to 8 and 3. Our final regular-season game will take place on February 19th against the undefeated first place team. Even if we don't win, we should finish in a position where we will make the playoffs. I realized that, although we had a bunch of games coming up in the same week, the one I had been nervous about was the JFP game. After that win, I was not too worried about the tournament, as the result did not count in our regular season.

As for the tournament, I was interested to see how we would measure up against AA-level teams from all around the province. There were 16 teams in our age category, so the setup was easy: if you lost the first game, you would be relegated to fighting it out for a position between 9th and 16th. Our first game was Friday night against Collège l'Assomption. I benefited from the help of Darlington, the coach of one of the city teams who has coached several of my girls before. The girls played a strong game. They were down by 4 at half, but thanks to a modified full court press (3 girls up, 2 back), they shut down the opposing team in the second half and pulled off a 7-point win.

Our second game on Saturday did not go as well. We were up against Langevin, a very tall and well-organised team and the pressure defense did not faze them. Alex was on our bench and pointed out that I was yelling at the girls a lot. It's hard to figure out when you are yelling so they can hear you out on the Court and when you are yelling because you're angry. Her comment made me think about what I say and how I say it. We ended up losing by our largest ever deficit, by a score of 47-18. Our defense was not great, but even if we had had a great game, I do not think we would have won. As a result of the loss, we were no longer in the running for the tournament win.

For our third game on Sunday, I told the girls to just go out there and have fun, as the result did not matter. We were playing against Roger-Comtois. We reverted to our old-fashioned man-to-man defense and the other team was unable to score very often and we gradually eked out a lead in a low-scoring game. I tried to keep things light and keep my comments positive. The girls looked like they were having more fun and played a solid game. We ended up winning 31-20 to end the tournament on a high note. Two wins in three games was not too shabby. Also, I just noticed online that Langevin went on to win the whole tournament, so it's not like we lost to a lousy team.

Here is a table showing the tournament results (our team is Reine-Marie): 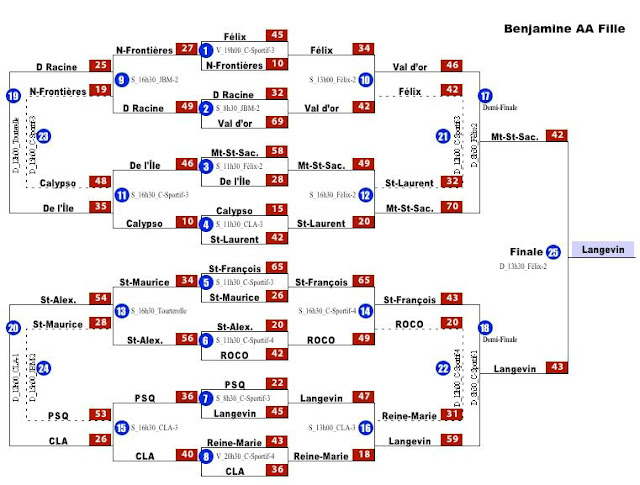 I am tired, but quite satisfied with the results. I have to thank Alex for joining me for the whole weekend and helping me manage the team. Thanks Alex!
Posted by Vincent Basile at 8:29 PM No comments: