Summer is really here. There is an opportunity to get on the track at least once a week, which is awesome. Two weekends ago, Trac Racing held its second time attack of the season at St-Eustache. Steph, Carl, JP and I would all be driving my car. Unfortunately, the 4-way shootout was cut short by a small overheating problem and a cracked trailing arm on the Civic, which made it handle quite dangerously. Carl came out on top, I was second, Steph third and JP spun on his timed run. We'll have to settle this like men at the third event! 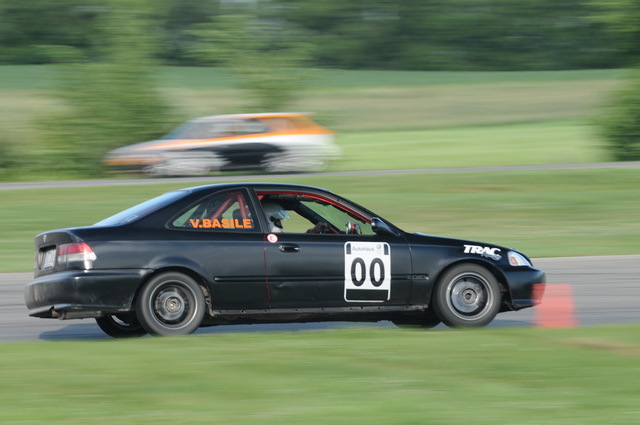 On Monday, I was instructing at TLC and I did a few laps in the street Civic. It was pretty hot out and the car's temperature climbed steadily. I guess the car will need a new rad if I want to seriously track it.

Tomorrow I'm heading to Mosport to instruct a the Solo 1 school and get some free track time in the (now repaired) Civic. Alex will come as well, as I promised her a day of tourism on Sunday. JP is coming to instruct and to participate in the Solo 1 on Sunday.

On the street: I saw a Jaguar XF... I love it. It's a beautiful sedan, almost as cool as the Maserati Quattroporte. I saw a weird Ferrari, either a 550 or 575, white with a huge rear wing. I don't know if it was a production model or if it was modified, but it looked and sounded really nice.